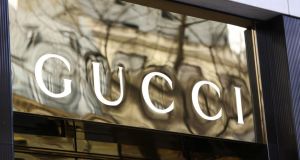 Gucci owner Kering said on Tuesday that the weak euro and strong dollar were likely to boost revenue this year but could hit margins in the first half due to its currency hedging policies.

The French luxury and sports brand group said the revitalisation of Gucci under new leadership would be a priority in 2015 as the Italian brand continued to see its comparable sales decline in the fourth quarter by 0.5 per cent.

Kering said it would focus on quality of service in Gucci stores and the attraction of its ready-to-wear collections. Gucci posted a 6.7 percent drop in 2014 operating profit to €1.05 billion, still contributing more than 60 per cent of the group total.

In December, Kering sacked Gucci’s creative and management chiefs after watching its sales plummet for more than two years, particularly in Asia. It appointed as chief executive Marco Bizzarri, who had shown his mettle at Bottega Veneta, and last month named as creative head Alessandro Michele, the right-hand man of his former boss Frida Giannini.

In contrast, Kering said revenue at Saint Laurent had doubled in three years under the creative stewardship of designer Hedi Slimane, and that the brand, which struggled for many years before, was now starting to contribute significantly to group profit.

Kering also said a sale of Sergio Rossi was one option under consideration for the high-end shoe brand. Sources had previously told Reuters that Sergio Rossi had been put up for sale informally for more than two years but had never found buyers.

“As of today, all options are being examined regarding Sergio Rossi assets,” Kering finance director Jean-Marc Dupleix said on a conference call.

Kering reported group operating profit of €1.66 billion for 2014, slightly below the average of analyst estimates.

The performance was helped in part by a revival at the Puma sports brand, according to analysts at Raymond James Euro Equities. Kering is the majority owner of Puma, which yesterday reported a 6.3 per cent increase in currency-adjusted sales for the fourth quarter.

“At this stage, there is not much in the quarterly update to further push Kering’s share price,” said Luca Solca, a luxury goods analyst at Exane BNP Paribas. “A faster-than-expected traction of the new Gucci team and the prospect of building a pure play luxury Kering down the road would be the two most important share price drivers from here.”

1 If tourists are such pariahs should we not be testing them on arrival?
2 ‘My rent here is so low it’s a joke’
3 Varadkar and Donohoe to meet banks to discuss mortgage breaks
4 WeWork on track for profits in 2021, says chairman
5 Belgium helps Ireland to a Brexit boon
6 The Westmeath farmer’s son with a Lidl plan for growth
7 What is Covid Tracker Ireland?
8 Can Grafton Street stop the flood of closures?
9 Buy a property with your pension? Government says no
10 SuperValu and Centra MD Martin Kelleher stepping down
Real news has value SUBSCRIBE

Varadkar and Donohoe to meet banks to discuss mortgage breaks 19:23
WeWork on track for profits in 2021, says chairman 13:33
Varadkar to meet banks in row over interest on mortgage payment breaks 12:26
If tourists are such pariahs should we not be testing them on arrival? 12:05
AIB to compensate another 1,100 tracker mortgage holders 11 Jul
Search executive
jobs on irishtimes.com