Volkswagen pledges to create 9,000 jobs in battery production and mobility services at factories in Germany 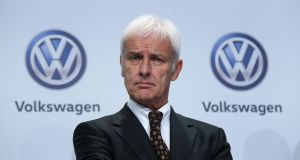 The CEO of Volkswagen Matthias Mueller at a company press conference in Wolfsburg, Germany, on November 18th. The company will cut 30,000 jobs worldwide to help it recover from its diesel-emissions scandal. Photograph: Ronny Hartmann/AFP

Europe’s largest carmaker Volkswagen sees building its own factory to make electronic vehicle batteries as a logical move as it expands production of low-emission cars after its emissions scandal.

Volkswagen and its labour unions agreed on Friday to cut 30,000 jobs at the core VW brand in exchange for a commitment to avoid forced redundancies in Germany until 2025.

The cuts came with a management pledge to create 9,000 new jobs in the area of battery production and mobility services at factories in Germany as part of efforts to shift towards electric and self-driving cars.

“If more than a quarter of our cars are to be electronic vehicles in the foreseeable future then we are going to need approximately three million batteries a year,” chief executive Matthias Mueller told Frankfurter Allgemeine Sonntagszeitung. “Then it makes sense to build our own factory.”

Volkswagen currently relies on external battery suppliers for the electric vehicles it makes.

“They [Uber] saw us more in the role of a supplier. But we said: okay guys, this is a contest which we are happy to take on. We will remain in command,” Mr Mueller said.

Automakers like VW are developing electric vehicles and billing themselves as mobility companies that do not merely sell cars but also get involved with alternatives to conventional car ownership such as ride-hailing.

Mr Mueller confirmed that Volkswagen had set aside €18 billion to cover the cost of its diesel emissions cheating scandal.

Volkswagen does not expect the German government to make tax demands to cover any revenue losses related to the scandal, a company spokesman said on Saturday. – Reuters