Belfast briefing: the trend for US groups to take over successful Northern Ireland businesses continues apace 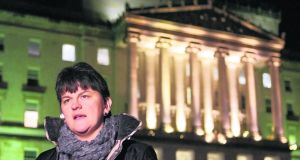 Minister for Enterprise Arlene Foster has said she views the acquisition of local companies by large international corporations as “a tremendous endorsement” of local skills and talent. Photograph: Paul Faith/PA Wire

East Belfast may not boast a sports team as famous as the Cincinnati Reds. But one Dundonald company is hoping that its leap into the big league will give it an opportunity to show its new Ohio-based owners that their dollars have been well spent.

Sepha is the latest promising local business to be snapped up by a US company – in this case the Cincinnati-headquartered Tasi Group – which last week announced the acquisition following a trade sale facilitated by Belfast-based investment house Enterprise Equity.

Sepha’s new owner is a major manufacturer of leak test products and measure equipment for the pharmaceutical/medical, automotive, food/beverage and oil/gas industries.

Since 1980, Sepha has also specialised in designing and developing innovative equipment for pharmaceutical industries. It manufactures both small blister packaging machines and hi-tech package leak detection machines which it exports to some 60 countries.

Its technology has helped the company – whose board includes two of the North’s most high-profile businessmen, Alan McClure and Hugh Cormican – grow revenues by 40 per cent in its last financial year. Latest accounts show that Sepha had net assets totalling more than £831,000 as of September 2012.

Perfect match
According to Brian Cummings, one of Enterprise Equity’s directors and a Sepha board member, the east Belfast company proved to be a perfect match for Tasi.

“Sepha brings new complementary products to the Tasi group and a very strong business: it already has a diverse range of blue-chip pharmaceutical clients. It is also very strong in South America where Tasi has been less successful so far. But the acquisition also gives Sepha a real opportunity to expand and to grow in the US market.”

He believes that its new owners will also create opportunities for Sepha’s 32 employees – mainly graduate engineers.

The acquisition highlights an increasing trend in the North. There have been a significant number of successful local businesses hooked by larger US rivals in the last three years.

The back-door investment route gives American companies an opportunity to acquire a business that is already flourishing but has not reached its potential without taking a risk on a green field venture.

It has proved so far to be a winning formula for the likes of Kana Software, which acquired Belfast’s Lagan Technologies in November 2010. Three months later Kana agreed a £7 million investment programme and a further 109 jobs for its new Belfast operation.

In the last three months, two successful software companies – Aepona and Maildistiller – have also been the subject of US buyovers.

Minister for Enterprise Arlene Foster has said she views the acquisition of local companies by large international corporations as “a tremendous endorsement” of local skills and talent. She is keen to stress that the North can only benefit from the arrival of larger organisations and everything they can bring to the local economy, from reinvestment to new jobs.

Highest bidder
All of which is true but would it not be nice if Northern Ireland businesses, started by local entrepreneurs, were able to expand and create jobs all by themselves without inevitably selling out to the highest bidder once they reach a certain size?

Until then, according to Enterprise Equity, Northern Ireland is climbing the “must see” list for acquisition-hungry US companies.