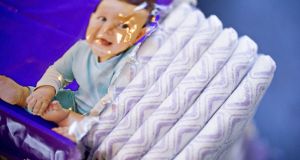 Procter & Gamble, the maker of Kleenex and Huggies, said on Tuesday that it was slashing as much as 13 per cent of its workforce in an attempt to cut manufacturing costs. Photograph: Bloomberg

Procter and Gamble delivered a message to activist investor and freshly minted board member Nelson Peltz: Things aren’t that bad.

The company reported second-quarter profit that topped analysts’ estimates, providing evidence that its turnaround is progressing. But Mr Peltz and like-minded investors may need more convincing. They sent the stock down as much as 1.9 per cent in the wake of the results, a sign that the drumbeat for more radical changes will continue.

Sales at the world’s largest consumer-products company were essentially in line with Wall Street estimates, and product categories like razors and baby care remain in a slump.

PandG’s biggest challenge is proving that it can remain relevant in an era of niche consumer brands and Amazon.com orders. That was the backdrop of a drawn-out proxy battle last year between the company and Peltz, who called for the addition of new brands and a drastically simplified corporate structure.

The stock fell as much as 3.1 per cent to $89.05 on Tuesday, marking the biggest intraday drop since October 20th. The shares have been little changed this year through Monday’s close. Fellow consumer-products giant Kimberly-Clark is also working on a painful reinvention.

The maker of Kleenex and Huggies said on Tuesday that it was slashing as much as 13 per cent of its workforce in an attempt to cut manufacturing costs.

The good news for PandG was profit growth. The company, which makes Head and Shoulders shampoo, Crest toothpaste and Gillette razors, posted an earnings gain of 10 per cent to $1.19 a share, excluding some items.

However, organic revenue - stripping out currency effects and other factors - grew more modestly, at 2 per cent.

The company reported revenue of $17.4 billion in the period, which ended December 31st. The once-ailing beauty division saw the biggest bounce, with a 9 per cent organic sales gain - helped by new Olay skin-care products and the luxury-priced SK-II brand.

Premium-priced items such as new Oral-B toothbrushes also contributed to a 4 percent gain in the health-care category. Sales in grooming, on the other hand, where the Gillette brand has been hit by cheaper startups, fell 3 per cent. PandG raised the top of its annual forecast range for core earnings by a percentage point, aiming for a 5 per cent to 8 percent gain. That was up from 5 per cent to 7 per cent earlier. – Bloomberg

European stocks pressured by yields, Iseq underperforms peers 19:22
EU and US agree to suspend tariffs on billions of euro worth of trade 18:30
Start Mortgages and Deloitte receivers accused of disgraceful behaviour 17:25
Can Davy’s clients stay silent as board goes into conclave? 16:59
Hotel takes case against insurer Zurich over failure to pay for Covid disruption 16:56
Search executive
jobs on irishtimes.com