British subsidiary’s sales and revenues up 40% to £4.6bn 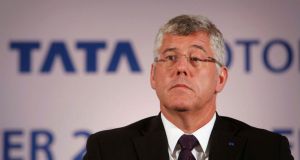 The Indian automotive group beat expectations in the quarter ended in September, with net profits up 71 per cent to Rs35.4 billion ($565 million), well above analyst forecasts of Rs25.5 billion.

The luxury British business, which Tata acquired in 2008, accounted for all the upside as the launch of a new Range Rover model and the Range Rover Sport spurred sales and helped operating margins rise to 17.8 per cent, far above those at rivals such as Mercedes-Benz or BMW. The Indian operations reported a fourth consecutive quarterly loss.

“The big change for the country’s economy and which therefore makes a big change for our business is in medium and heavy-duty trucks,” said Karl Slym yesterday, Tata Motors managing director .

In the Indian market, where Tata sells cheap hatchbacks and SUVs and is the largest truck and bus manufacturer by sales, the company reported a net loss after paying tax of Rs8 billion in the quarter.

“They don’t have a product line to compete with the numerous [foreign carmakers] that are launching in India, ” said Joseph George, an automotive sector analyst ahead of the results.

Mr Slym said a pick-up in sentiment will first boost passenger car sales. Truck owners are facing a situation where they have 40 per cent idle capacity, and that will be filled before new vehicles are required.

JLR’s huge growth in sales and revenue, up 40 per cent to £4.6 billion during the quarter, has become one of the UK’s most celebrated manufacturing successes over the past few years, and led a renaissance of the country’s once bankrupt and battered car industry. – Copyright The Financial Times Limited 2013

1 Joint accounts: if one of us dies, can the other access the money?
2 Working from home: New costs, new stresses and little relief
3 HSBC board rethinks overhaul and seeks even deeper cuts
4 We are ‘sale agreed’, but can we go back with a lower offer?
5 Investor alleges fraud over collapse in property fund value
6 Electrical contractors fear closure under new pay law
7 DAA offers workers up to two years’ wages in redundancy plan
8 Stocktake: History says this is not a bear market rally
9 Fierce debate brews as EU Commission lays out recovery plans
10 Merck leaps into Covid-19 development fray with vaccine, drug deals
Real news has value SUBSCRIBE