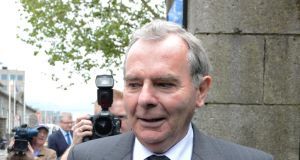 The family of bankrupt businessman Seán Quinn recently warned that it would “vigorously” pursue the return of any part of his former empire sold ahead of its action against the former Anglo Irish Bank and share receiver Kieran Wallace.

RHP Bidco acquired the company from Aventas, the vehicle that owns most of the old Quinn family group’s productive business.

Quinn Radiators has its manufacturing plant in Newport, Wales and has a significant market presence in the UK, Ireland, France, the Netherlands and Belgium.

RHP Bidco is chaired by Tony Mullins with Brian Beausang and David Kerr as directors.

In 2004, Seán Quinn trumped Mr Mullins’s €70 million bid to take Barlo private with an €84 million offer. It is now part of Aventas, which was formerly owned by Seán Quinn,

Aventas rebranded from Quinn Manufacturing Group in November 2013. It has a number of operating divisions that have a portfolio of businesses.

“We are very pleased to have completed this transaction and look forward to working with staff and suppliers to ensure we continue to provide excellent service to our customers with a top quality product,” said Mr Kerr, who is to take over as chief executive of Quinn Radiators.

“This sale of Quinn Radiators is a first step in realising value for Aventas Group investors,” he said.

“We are pleased to have sold our radiators business to RHP Bidco Limited and we wish Tony Mullins and his team every success in the future development of this business,”he added.

The family of bankrupt businessman Seán Quinn recently warned that it would “vigorously” pursue the return of any part of his former empire sold ahead of its action against the former Anglo Irish Bank and share receiver Kieran Wallace.

In September, the Quinn Business Retention Company (QBRC), whose backers include of some of the group’s former executives, agreed to buy the old Quinn Group’s construction supplies division and its packaging business in a deal expected to be completed this month.