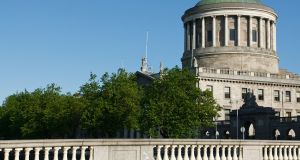 The call was made by Mr Justice Mark Sanfey when making orders on Thursday in two judgments concerning the dispute which continues following an unsuccessful mediation. Photograph: iStock

A High Court judge has urged a family whose company makes and sells jewellery, including the world-famous Claddagh rings, to renew efforts to resolve their differences.

The call to try and resolve the row was made by Mr Justice Mark Sanfey when making orders on Thursday in two judgments concerning the dispute which continues following an unsuccessful mediation.

In one case, Andrew Fried, of Leac Lian, Barna, Co Galway, claimed Philip Fried, in conjunction with their father Laszlo, who is neither a shareholder nor director of the firm, attempted to interfere with the business of CJL.

The claims were denied and, in his defence, Philip claimed he was being oppressed as a director.

In his judgment, Mr Justice Sanfey said, shortly before those proceedings were due to be heard last month, Andrew’s lawyers came off record due to a lack of instructions from their client and Andrew did not attend the hearing of those proceedings.

Arising out of that non-attendance, Philip Fried’s lawyers, Martin Hayden SC, with Stephen Moran BL, sought various orders against Andrew, including orders directing Philip be restored as a company director and that Andrew immediately hand over all of the company’s assets and account for all monies spent by the firm.

In his ruling, the judge made orders striking out the action brought by Andrew and directing that Philip be restored as a director of CJL. He declined to make other orders sought in relation to the company until the matter returns before the court later this month.

In a separate, but related, case against Andrew Fried and Claddagh Ring Ltd, Philip Fried, of Thornberry, Barna, claims he is the sole owner of the trademark “Claddagh Jewellers”.

In that action, Philip seeks various orders and declarations including one restraining his brother and the company from infringing what he, Philip, claims is his trademark.

Andrew Fried accepted the trademark had been registered in his brother’s name but denied Philip had ever owned it.

In a ruling in relation to those proceedings, Mr Justice Sanfey said he would grant Philip an injunction, to remain in place pending the outcome of the proceedings, restraining Andrew using or infringing the mark ‘Claddagh Jewellers”.

The judge also said he could only urge the brothers to make renewed efforts to resolve matters without further recourse to court outings which would likely harm the business, deplete its resources, damage its reputation and put employees’ jobs at risk.

Separate proceedings by financial fund Promontoria Aran Ltd and receivers over a premises in Galway City in relation to a company called Jaszai Ltd, linked to Laszlo Fried, remain pending and will return before the judge later this month.