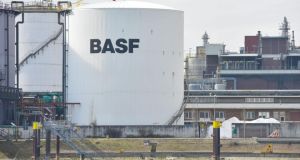 BASF, the world’s largest chemical firm by sales, expects operating profit to stagnate this year due to lower oil prices and the cost of launching an unusually high number of production sites.

The company, whose products include car coatings, foam chemicals, catalytic converters and mining chemicals, said the prospects of somewhat stronger global economic growth this year were nevertheless fraught with uncertainty.

The shares dropped 3 percent by 1024 GMT, having gained almost 25 percent so far this year before Friday, while the wider chemicals market was 0.3 percent lower.

At a 25 per cent premium to price-earnings multiples in the sector the “shares have, in our view, clearly run ahead of themselves,” said Kepler Cheuvreux analyst Christian Faitz.

BASF said earnings before interest and tax (EBIT) in the last three months of 2014, adjusted for one-off items, edged 2.8 per cent higher from a year earlier to €1.46 billion, above forecasts. – Reuters