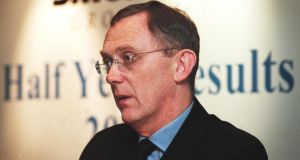 The perennial rumours that Gary McGann was planning to step down as chief executive of Smurfit Kappa Group (SKG) were proved correct yesterday.

In his 13 years at the helm of the packaging group, and across his 47-year career as a whole, McGann has seen the best of times and the worst of times.

The events of his SKG tenure are a fitting microcosm of the currents and eddies that have sloshed around the Irish economy during the same period. The company journeyed from solid performer to irrational exuberance, to debt-addled agony, to today’s hard-won salvation with a seemingly bright future.

In the boom years, McGann’s SKG answered the siren call of debt-fuelled giddiness. In fairness to him, the markets demanded it. He answered with gusto.

By the end of the following year, its share price hovered a little over €1.

“That was the absolute lowlight of my career,” said McGann this week.

He cleaned up the mess and steered it through the crisis, sorted its debt problem, and now the group looks a good bet against its peers. A bit like Ireland.

McGann conceded yesterday that “proximity” is probably clouding his judgment when he singled out the turnaround of the group as his best achievement.

His career has steered him across several sectors of the Irish economy, public and private. After a stint as a civil servant, he became financial contoller of Ericsson Ireland, long before Ireland was the tech hotbed it is today.

He then entered the drinks industry at Gilbeys, before running Aer Lingus in the 1990s prior to joining the Jefferson Smurfit Group, the forerunner of his current company. He also served as chairman of the Dublin Airport Authority.

“People will never remember you for what you’ve done,” McGann said yesterday. Unfortunately for him, many people may remember his contribution to Irish business through the prism of his directorship of the ill-fated Anglo Irish Bank. He sat on its board while its executives drove the bank against a wall.

That period aside, McGann’s record as a corporate performer – an executive who delivered the goods but who also cleaned up after his mistakes – should make him stand out among his peers.

He is believed to be limbering up for a bid for the chairmanship of Paddy Power, when next it becomes available. What are the odds of him still remaining a significant figure in corporate Ireland in the years to come?