All VW models in Germany to be retested 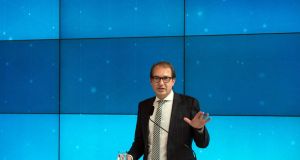 Germany is to retest all Volkswagen car models to gauge their genuine emissions levels after new revelations from the carmaker six weeks into its biggest-ever corporate scandal, pushed the government to act.

Expressing his “irritation” with one of Germany’s biggest employers, transport minister Alexander Dobrindt said all current models sold under the VW, Audi, Skoda and Seat brands – with both diesel and petrol engines – would be tested for carbon dioxide and nitrogen dioxide emissions.

He said around a quarter of the 800,000 vehicles Volkswagen has said are affected by the latest irregularities are on German roads. “Of the 800,000 vehicles with false CO2 and consumption values, around 200,000 are on the road in Germany. We expect that for these cases the car tax will need to be adjusted,” he said.

There is still no indication whether Irish registered cars feature in the latest emissions scandal. If they do it would likely have tax implications as well. This could lead to potential legal action by owners here against VW Group.

The latest revelations have led to calls for Volkswagen to tear up its complex corporate governance structure. News that the scandal had moved to CO2 emissions knocked a further 10 per cent off its share price on Wednesday.

Investors and governance experts called for a radical overhaul that would involve the families, state government and sovereign wealth fund that are the carmaker’s biggest shareholders all giving up seats on its supervisory board. Their comments were underscored on Wednesday when Moody’s, the US credit rating agency, downgraded VW’s debt, echoing a similar move by Standard & Poor’s last month. VW’s shares had already fallen as much as 10 per cent and closed just above €100 before the announcement.

Moody’s cited the risk to VW’s reputation and earnings from the latest revelations of problems with the carbon dioxide emissions of 800,000 cars and allegations from US regulators this week that earlier problems over nitrogen oxide emissions in diesel-powered vehicles extended to luxury cars, including a Porsche model.

Only one member of VW’s 20-strong supervisory board is seen as independent of the carmaker and its controlling shareholders. The Porsche and Piëch families have five directors, with the state of Lower Saxony and a Qatari fund holding two each as the three shareholders together hold 90 per cent of the shares in terms of voting rights. Workers and unions have 10 board members, leaving Annika Falkengren, chief executive of bank SEB, as the sole independent director.

Christian Strenger, a member of Germany’s corporate governance commission, said the supervisory board’s control mechanism was deficient. “Five out of the 10 shareholder seats should represent fresh blood to re-establish credibility, that is a prerequisite for a real return to normality.” – (Additional reporting: Reuters/The Financial Times Limited)

1 ‘I’m so lucky to be in the Caribbean – a million miles from Derry Girls’
2 ‘The recovery needs to be a full-scale economic renewal’
3 Ten of the most mysterious aircraft disappearances
4 Tobacco makers still trying to make a mint from Irish menthol market
5 Michael Smurfit: ‘I asked Trump to invite me to the White House for my 80th birthday’
6 Tax and the Pandemic Unemployment Payment: Your questions answered
7 Ryanair expects air fares to fall when flights take off again
8 The economy and full employment: are we there yet?
9 Entrepreneur of the Year finalist: Jim Wright of JMW Farms Ltd, JMW Farms IRL Ltd, Crockway Farms Ltd
10 Ireland’s recovery is partially due to us learning our lesson
Real news has value SUBSCRIBE