Business has agreed strategy with Nama 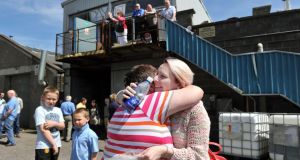 Former Vita Cortex worker Catherine McCabe greeted by her mother Marian in Cork at the end to their factory sit-in.

Two other firms recorded profits of €251,000 between them, resulting in the net combined post-tax loss of €2.3 million.

A note with the accounts confirms the business has agreed a strategy with Nama to dispose of property assets that have been pledged as loan security.

Vita Five Five Ltd subsidiary, Vita Cortex was involved in a long-running dispute in 2012 when workers staged a five month sit-in at the company’s Cork plant in a row over redundancy payments.

1 Should my mam wait for house prices to drop before buying?
2 Cheers: Conor McGregor's whiskey races up the sales chart
3 Two prominent business leaders in planning row with neighbour
4 ‘I’m so lucky to be in the Caribbean – a million miles from Derry Girls’
5 Coronavirus: Big majority ‘uncomfortable’ returning to everyday activities
6 Global stocks climb near three-month highs as rebound hopes grow
7 ASL Aviation Holdings chief to retire after 22 years in post
8 Hard-hit SMEs get ‘paltry’ €11m worth of loans under State scheme
9 Battle for control of America’s mammoth utility industry set to intensify
10 Michael Smurfit: ‘I asked Trump to invite me to the White House for my 80th birthday’
Real news has value SUBSCRIBE