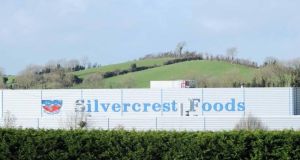 The ABP Food Group has agreed a deal to sell the Silvercrest facility at Ballybay, Co Monaghan, as part of its plan to exit the frozen burger sector in Ireland.

The company is being sold to the Kepak Group, subject to Competition Authority approval. The value of the deal was not disclosed.

The sale involves the transfer of 122 staff currently employed at Silvercrest , who have been kept on full pay while the future of the plant was being resolved. ABP Food Group chief executive Paul Finnerty said the deal would “draw a line” under the recent horsemeat controversy.

“The deal will allow us to focus on the other 97 per cent of the group’s activities,” said Mr Finnerty.

The horsemeat scandal emerged in January after tests by the Food Safety Authority of Ireland in December found horsemeat content of 29 per cent in the meat of a frozen burger produced by the Silvercrest plant.

After the results were published in January, production was suspended at the plant and it lost several major contracts with firms such as Tesco, Burger King, Aldi and the UK Co-Operative Group, worth in the region of €60 million.

Mr Finnerty said the decision to sell the plant is the right one for both the wider group and also for the employees. He said it had become apparent that the group was only one of a large number of leading European operations affected by the equine issue and that the controversy had “disturbed the industry”.

The company said its chilled business has been unaffected by the horsemeat issue and that sales of these products had remained unaffected.

“Irish beef is held in the highest regard internationally and, as Europe’s largest beef exporter, ABP Food Group will continue to invest in expanding and developing this and the other businesses within the group,”said Mr Finnerty.

Earlier this week, the beef processing industry in Ireland and the UK got a clean bill of health following a series of sample tests by European officials for horse meat contamination.

Kepak said the accquisition of Silvercrest would fit in well with its burger and convenience food strategy. Managing director John Horgan said he was looking forward, subject to approval of the compeition authority, to working with staff at the Ballybay plant and returning the facility to full production in the coming months.

IFA Livestock Chairman Henry Burns described the decision as a “positive move.” He said “For the entire sector – from farmers to suppliers and those working in the plant - the key is to retain existing contracts and markets. Kepak will bring their experience and expertise in the beef processing industry to the plant, and I wish them every success with it.”

ABP employs 8,000 people in 36 facilities in eight countries, of which 2,500 are employed in Ireland. It had a turnover of €2.2 billion in 5the year to 2012 accordinmg to Top1000.ie and invested €150 million in the expansion and development of its businesses in Ireland and abroad in the past three years. Kepak had sales of €775 million in the year to September and employs 2,000 people, according to Top1000.ie