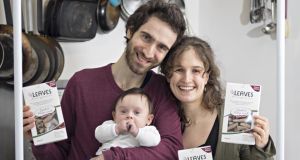 Nico Olivieri and Sabine Hobbel: “Our products are intended for people who pursue a healthy lifestyle in which highly nutritious, clean foods play a major role.”

Pasta with Benefits is a new, wheat-free pasta product from Dublin-based natural food company, Leaves. Made from buckwheat and chickpeas, the product is naturally gluten-free and contains 50 per cent more protein and three times more fibre than regular pasta.

The product has been developed by husband and wife, Nico Olivieri and Sabine Hobbel. They set up Leaves in late 2013 as a natural foods catering service, before moving into manufacturing with the emphasis on foods delivering specific nutritional benefits that also suit those with dietary intolerances.

The company makes own label foods for outlets such as the Fresh supermarket chain, and since last November has been selling under its own Leaves artisan pasta brand in SuperValu and more than 40 independent speciality stores. Pasta with Benefits will go on sale in Ireland this summer, followed by the UK and selected European markets.

Like many Italians, Nico Olivieri has been passionate about food since he was a small boy. However, when it came to choosing a career he decided to study communication sciences at the University of Milan. But his love of food never left him and having worked in fundraising with organisations such as Greenpeace, he moved to Amsterdam in 2008 to train as a chef. He then ran his own deli and catering service there for three years, before moving to Ireland to set up Leaves with his wife, Sabine Hobbel, a former health researcher at the University of Amsterdam and elite hockey player for the Netherlands.

“Pasta with Benefits is the only pasta on the market that provides a high nutritional profile, premium quality taste and convenience all in one packet,” Olivieri says. “Most regular pasta, including many gluten-free options, have issues from a nutritional point of view. Due to the natural composition of the flours commonly used and the high-heat treatments used to dry them, these pastas do not provide enough nutrients and often just become a mere carbohydrate load. Chickpeas and buckwheat are among the most complete plant-based sources of nutrients available and we slow dry our pasta at low temperatures to preserve the texture and its nutritional profile. Our pasta is also high in protein and fibre, keeping you fuller for longer and releasing energy slowly throughout the day.”

Olivieri expects Pasta with Benefits to have international appeal and the company is currently participating in the Bord Bia Foodworks programme which is targeted at food businesses with export potential. The company, which employs four people, has received employment support from Dublin City Local Enterprise Office and funding from Enterprise Ireland through its feasibility and Innovation Voucher programmes.

“It is hard to say how much it has cost to develop the product but we have invested all of our savings in the business and have taken a very lean approach to new product development. We work initially in small batches to establish proof of concept before committing big amounts of capital to manufacturing,” Olivieri says.

“We started our research for Pasta with Benefits over 16 months ago and having looked very closely at the other products available, we believe we are the first to produce a convenient (our product cooks in les than five minutes) premium health product within the pasta segment for the European market,” he adds.

“Our products are intended for people who pursue a healthy lifestyle in which highly nutritious, clean foods play a major role. They are also aimed at those who want to introduce protein, fibre and other important nutrients to their diet in an easier and tastier way. As a company, we are passionate about the possibility of building a future for our family while making the world a bit healthier and more sustainable, one bowl of pasta at a time.”