Ireland's 'dirty little secret' when it comes to start-ups 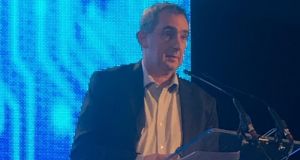 Describing the situation as Ireland’s “dirty little secret”, the founder of Tweak. com, said that while we are great at encouraging start-ups and providing encouragement as they grow “little thought has been put into the long-term resourcing of our indigenous entrepreneurial economy”.

Addressing the Irish Times Innovation Awards on Wednesday night, he said: “Many of our homegrown start-ups depend on technology innovation and software development in particular. Yet Irish students are not choosing software development in any large scale and there is a huge shortfall in qualified Irish graduates. It’s ironic that as our economy has become more sophisticated and with Irish-owned firms becoming global leaders themselves, that the lack of cohesive State policy is limiting potential and damaging its key players.”

Kennelly, who sold his company Stockbyte to Getty Images in 2006 for $135 million, told the 220 guests at the awards night in the Royal Hospital Kilmainham, Dublin, how he began as a photojournalist before setting up Stockbyte. He said his more recent venture Tweak.com, which was a category winner in the awards in 2012, had been lucky to have attracted talented Portuguese software engineers.

Kennelly also pointed to the success of the IDA’s foreign-investment strategy as making the problem even worse. “Every small start-up must compete against Google, Facebook and others for software developers. This imbalance has hugely unintended consequences for the indigenous entrepreneurs as they seek to build their businesses alongside the giants. For the past five years at least thousands of software engineering jobs have gone unfilled in Ireland as the giants suck up all the available talent like a giant factory ship. That talent isn’t being used for real software development; most of it being used for sales and support.”

“The bottom line is that our competitive position as a nation is being seriously eroded by the failure to address this imbalance,” he said.

He said software engineering needed to move from “its unfair positioning from an occupation for the geeky and introverted to what it really deserves: a place for the smart visionaries of the future”.

“With this huge deficit of local talent and the huge multiplier in costs, it means that Irish start-ups require a multiple of the capital and - therefore risk - over a start-up in Spain, Portugal or Poland, ” he said.

“This huge premium in research and development leaves us a long way from the point of serendipitous discovery. If we are really serious about having companies that can innovate and sustain long-term revenue, we need to produce more citizens who are highly competent in the software disciplines that matter at an early age.”

Kennelly outlined how this problem was “a great opportunity for Government to spring into action just the same way they did with the housing crisis”. Setting a target for 5,000 software engineering graduates every year, he said: “Let’s aim to become the greatest location in the English-speaking world for software developers and provide not just the support but also the infrastructure for an entrepreneur-led economy.”

He also called for courses to be created as apprenticeships with work placement: “Instead of the normal two-semester system per year, let’s make it three or four and help our young people get out into the workplace faster. That would let our young people get to the level of senior engineers by the time they reach 25. If we do this I bet you by the time these people are in their 30s these people will be the next generation of chief technology officers, chief information officers, founders and co-founders.

“The impact this would have on the Irish start-up economy would be huge. We are already successful, despite being hamstrung by having to have our teams in the far corners of Europe.”

He added: “Creating the best pool of software development talent in Europe would turbocharge Irish business and produce a generation of entrepreneurs with huge talent and prospects, working both for themselves and for others. If we can become the location for choice for software development then both national and international tech firms can live here in harmony without eating each other’s lunch.

“The outcome of this bold strategy – if the Government is brave enough – is to remove one of the biggest barriers to the growth of the Irish economy and bring more valuable R&D to Ireland.”