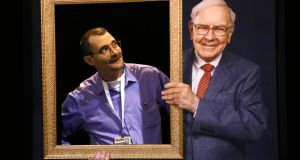 Berkshire Hathaway shareholder Richard Harmon poses in an opening in a wall behind a picture frame held by a photograph of Berkshire chairman Warren Buffet, at the company’s annual meeting in Omaha. Photograph: Reuters/Rick Wilking


Twenty thousand people braved the Nebraska drizzle at the weekend for a seat at one of the events of the investor calendar – the Berkshire Hathaway annual meeting.

A year ago, discontent rumbled at the level of the conglomerate’s share price, but on Friday it had reached a record $160,294 per A share. With a $268 billion market capitalisation, the Oracle of Omaha, Warren Buffett reported that Berkshire was the world’s fifth-largest company.


Massive portfolio
The investor has spent half a century accumulating more than 70 companies in sectors ranging from candy bars and corporate jets to insurance and cargo trains, and as his company has grown, so have the crowds of pilgrims drawn to Omaha. Many come because there may not be many more and, in a world of online real-time updates, it is the rare event where recording and broadcasting are not allowed.

The message is unchanging: buy stocks at the right price, be optimistic, trust Warren. But shareholders said that hearing it each year was a mental reset.

If there was a downbeat message, it was a familiar one that Berkshire’s size meant future growth must be slower, “because of course our past returns were almost unbelievable”, said Charlie Munger, his vice-chairman.


Looming inflation
The two men warned that bond-buying by the Federal Reserve would have unpredictable consequences. Mr Buffett said: “It’s been a very smart policy, but the unwind of it has got to be more difficult than buying.” He said that when inflation did pick up, “it’s likely to be the shot heard round the world”, but he could not predict when and said it “doesn’t mean the world will end”.

The meeting alternated between the merits of individual Berkshire business, fads such as online currency – “of our $49 billion [of cash] we haven’t moved any to Bitcoin”, said Mr Buffett – and requests for advice. The insurance business was a favourite, particularly Geico.

But Mr Buffett revealed that four top insurance executives he recently poached from AIG to build a commercial insurance business had approached Berkshire about the move. “It could be a business that reaches into the billions,” Mr Buffett said. “We’ve got the right people. We’ve got capital like no one else.” – (Copyright The Financial Times Limited 2013)