International research: if you’re not in you can’t win 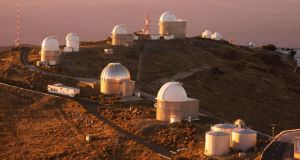 European Southern Observatory: ESO is a very interesting body at the moment given it is spending more than €1 billion to build the European-Extremely Large Telescope (E-ELT), the largest telescope in the world when complete

Most times a deal too good to be true really is and can be dismissed. But every now and then a good deal genuinely is a good deal and should be grabbed with both hands.

A group set up by the Government is staring at one of these deals right now. The International Research Organisation review panel is considering whether Ireland should stump up the cash and join august research bodies such as the European Southern Observatory (ESO) and Cern to name two. The problem is there is no such thing as a free lunch – there are fees to be paid if we want to become members of these organisations.

We are not neophytes when it comes to such bodies. We are members of the European Space Agency (ESA) and of the European Molecular Biology Laboratory, for example. Membership is valuable in that you gain access to some of the world’s most advanced scientific equipment, interact with top scientists, apply for commercial contracts that supply equipment and services to these bodies and engage students in highly advanced scientific activity.

Membership of ESA costs about €17.3 million a year, so when times are tough one would have to be satisfied committing this much money delivers a payback. And it does. Being in ESA has helped 80 companies pull in €80 million worth of direct ESA contracts since 2000.

And Enterprise Ireland, which promotes these commercial opportunities amongst Irish SMEs, says the returns are actually better given a multiplier effect when you take into account subcontractors and other service providers feeding into the main ESA contract holder.

If these figures are true, and these are official figures, then it comes down to the simplest of equations: for every €1 you put into ESA membership you get a payback of at least €6 .

Ireland’s research astronomers are using these same figures to promote Irish membership of ESO. Late last month Trinity College Dublin hosted a “get-together” event that saw staff from ESO meeting with companies who might be in a position to bid for ESO contract work. The Institute of Physics also put together a very slick publication arguing in strong economic terms about the benefits accruing to Ireland if we become an ESO member.

ESO is a very interesting body at the moment given it is spending more than €1 billion to build the European-Extremely Large Telescope (E-ELT), the largest telescope in the world when complete. There are lots of things on ESO’s shopping list given the scale of the project, and member countries are given the first shot at filling these orders. So if you are not in you can’t win.

ESO isn’t just the E-ELT, it has a whole complex of astronomical instruments peering out into space and has a procurement requirement of €120 million a year.

Sceptics might assume Ireland is too small to win contracts, but our experience with ESA proves this to be flat wrong.

And success builds on success with 20 to 30 new ESA contracts won by Irish firms every year. Ireland has plenty of companies who can deal in technologies of interest to ESO, hence Trinity’s get-together a few weeks ago.

The institute argues that payback levels would be similar to those of ESA if we were to join ESO. The cost of membership is linked to a country’s gross domestic product, and based on 2014 figures Ireland would have to pay a once-off €11.2 million plus a €1.9 million contribution to the cost of the E-ELT. After that it would cost about €1.6 million a year.

ESO membership would cost us about €29.1 million over 10 years, and based on our ESA performance our SMEs would win back €11.2 million in contracts over this time. But the six-from-one multiplier effect would bring this to an estimated €66 million won by the Irish economy so we would better than double our investment, the institute calculates.

But these are all just numbers – there is also Ireland’s reputation to consider.

Membership would give our researchers guaranteed access to ESO facilities. Time on the equipment is won by astronomical research of the highest order and this opens up opportunities for collaboration, giving our astronomers a wonderful platform.

Irish students would also have opportunities to plug into this, getting involved in world class research. And space research has continually served as a spur to encourage more students to study science and maths subjects. ESO has developed programmes in support of student and wider public outreach.

Hopefully the Government’s review panel will see the merits of ESO membership and recommend the investment. Next up is membership of Cern, another multi-billion euro enterprise where Irish participation would bring benefits.