Copying can be a good thing if minds combine to innovate

Plagiarism gets bad press but, in his book ‘Copy, Copy, Copy’, Mark Earls shows its benefits 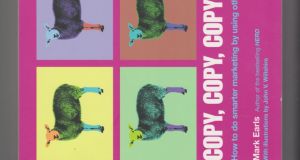 Copying gets a bad press. Notions of plagiarism and unfair or unethical benefit from the work of others easily come to mind. In a culture and an era when innovation and originality is celebrated, copying seems lazy and uninspiring at best and, in some cases, brings down the wrath of those who feel their intellectual property rights have been violated.

Copying has always had a place, however, in the evolution of big ideas in science and technology as well fields as diverse as commerce, arts and literature and there are some very positive aspects of adapting the work of others. That’s the premise of this book by Mark Earls, author of a previous bestseller called Herds.

Earls’ proposition is a simple one. Original ideas are generally the product of many minds, not one-man bands. And it’s what we learn from each other – what we copy – that allows us to create new things. Copying can, in the right circumstances, create novel and effective solutions to problems.

Not all copying is good. In one of the many popular cultural references in this book, Earls brands tight replication as “Single White Female” copying after the film of the same name. This is a bad idea. Ripping off something in a manner of a Far Eastern sweatshop and passing it off as an original, does nobody any good.

By contrast “loose copying” adds value. This copying with a twist or copying in a different context is something that should be embraced and stigma around it should be overcome. Such concern is a relatively recent and peculiarly Anglo-Saxon phenomenon, the author notes.

One very effective way of using copying as an engine of innovation is to use it to “fix” things. There’s a common misconception that James Watt, for example, was the father of the industrial revolution being the inventor of the steam engine. The truth is somewhat different. Watt didn’t invent it as such; he merely modified the designs of engineers such as Thomas Newcomen. His breakthrough involved adding an external condenser to a steam engine that drove the pistons so that main cylinder didn’t have to cool and be heated repeatedly. In modern terms this would be described as a “hack” (or solution-solving shortcut) rather than an innovation.

This approach can be applied to many industries. First, identify what’s broken and then focus on the solution. There’s no need to rethink the entire process. Just focus on the piece that can be improved.

Copying from a distance is another key idea presented here. Modern popular culture is big on the notion of “mash up”, taking two unrelated things, putting them together and creating serendipitous novelty from the combination. This follows a long tradition. Writer TS Elliot is quoted saying, “A good poet will usually borrow from authors remote in time, or alien in language or diverse in interest.”

Knowing how things should be done – what the rules are – is often a handicap. By contrast, porting the rules of one market to another one can be a huge benefit as unforeseen opportunities and fresh insights can be revealed. Earls suggests that we suspend disbelief and ask ourselves what, for example, Facebook would do if it was in the vacation business or Apple if it was in furniture retailing.

At a more conservative level, case studies, a favoured teaching method in MBA programmes among others, offer ways of learning from others or templates for copying. The author suggests that while great value can be gleaned here it is important to know how to identify authentic success.

One way of doing this is to check the long-term track record and to ask three questions: which strategies are merely associated with success and which are causally connected, which always bring success and which only sometimes do and, finally, which solve problems and what is each suitable for.

Earls has written a thoughtful and well-presented volume here and his publishers have helped with an accessible and attractive landscape format design and layout.