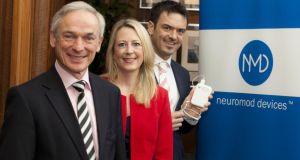 US ocean energy company Resolute Marine is to create 80 new jobs over the next five years, with the establishment of a European headquarters in Cork.

Resolute Marine Energy chief executive Bill Staby said the company expects to create 25 high-paying technical jobs over the next two years in Cork and as many as 50 additional jobs as the company’s manufacturing operations expand to meet anticipated demand.

“We’re confident our decision to set up our European operations in Cork is a good one. We have positioned ourselves in the middle of a maritime innovation hub that will yield great benefits for our company over time,” he said.

Resolute Marine is a subsidiary of Boston-based Resolute Marine Energy, and is the developer of an innovative wave-powered desalination system that is a cost-effective solution for water shortages in many developing countries and remote communities throughout the world.

Separately, a company involved in salvaging the cruise liner Costa Concordia off the Italian cost is also establishing a European headquarters at the Irish Maritime and Energy Research Cluster (IMERC) in Ringaskiddy, Co Cork.

Resolve Marine, which has experience of other salvage operations such as the MV Rena off New Zealand, said it will create up to six jobs in Cork in the next 12 months.

The company’s chief executive Joe Farrell said he was attracted to Cork by the “talent pipeline” in the marine energy cluster.

Resolve Marine has been working closely with marine robotics teams in IMERC and the University of Limerick on remotely operated vehicles for salvage.

Meanwhile, Irish medical devices company Neuromod is to create 50 jobs in Dublin over the next five years.

The company which is headquartered in NovaUCD, the centre for new ventures and entrepreneurs at University College Dublin, said the highly specialised roles will be key in supporting its global growth targets.

The jobs announcement came as Neuromod Devices launched mutebutton, a new device for the treatment of Tinnitus.

Neuromod Devices chief executive Dr Ross O’Neill said the mutebutton device will be on sale in Ireland from Monday 15 December ahead of a wider European launch commencing January.

“After four years of research and development, today Neuromod Devices is positioned to meet the unmet needs of tinnitus patients’ globally, with the launch of the mutebutton device,” he said.