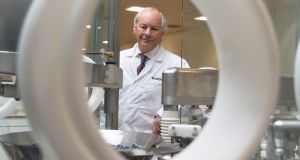 Peter Fitzgerald: “It has been a long journey, and if we weren’t a private company I’d have probably been sacked many years ago.” Photograph: Colm Lenaghan/Pacemaker

It took Randox Laboratories 34 years to achieve £1 billion (€1.1 billion) in accumulated sales. The healthcare group, based in Crumlin, Co Antrim, now expects to add another £1 billion to revenues by 2021.

For years Randox was primarily a business-to-business company developing and manufacturing diagnostic tests for use by hospitals, clinics and veterinary laboratories. It is now increasingly moving into selling directly to consumers with its walk-in wellness clinics, which offer an NCT-like test of the body.

An offshoot firm, Randox Health, has designed a suite of high-tech products that give highly accurate and rapid diagnoses for diseases and health complaints. Its biochip arrays can perform more than 350 tests on a simple blood sample.

“We set up an experimental clinic in a filling station in Crumlin Village because we felt that if we could help people find a way to improve their lives, that they would pay for it,” says founder and managing director Peter FitzGerald. “We were proven correct in this, but first we had to let them know what we did, which is something we hadn’t really needed to focus on that much previously.”

The firm has health clinics in Belfast and London, and is in rapid expansion mode, with at least 50 new centres planned over the next five years. In 2017 alone, it expects to open clinics in Edinburgh, Manchester, Liverpool, Dublin, Los Angeles and Dubai. The last of these is a joint venture with Seed Mena, a group of companies owned by Sheikh Saeed bin Ahmed Al Maktoum, a member of Dubai’s royal family.

To coincide with Randox’s expansion, the previously low-profile group has recently taken on sponsorship of the Aintree Grand National in a five-year, multimillion pound deal. It has also established a new science park at the former British army barracks in Massereene, Co Antrim, the site where two soldiers were shot dead by dissident republicans in 2009.

“This is a very important time in the company’s development, and it comes after millions of pounds of investment has been made,” says FitzGerald, sitting in a meeting room at the group’s new premises. Largely empty (more staff are due to move in shortly), the property still resembles a former military base, albeit one where the staff wear lab coats instead of army fatigues.

“The main reason we acquired the barracks was simply that it was 43 acres with good buildings and we needed some room for expansion,” he says. “We’re obviously aware of the past events that have occurred here, but everyone sees our move here as a positive thing.”

For FitzGerald, a biochemist who says he is happiest when in the laboratory, Randox’s recent foray into the limelight through initiatives such as the Grand National sponsorship, and the acquisition of the 1,200-acre Dundarave Estate in Bushmills village for a new corporate hospitality centre, is unchartered territory for the formerly publicity-shy group.

In setting up its first two health clinics (the first in Crumlin, a stone’s throw from the company’s current headquarters on Diamond Road, and the second in Holywood, near Belfast), FitzGerald realised that few people, even locals, knew exactly what the company did.

“Traditionally, we’ve been a B2B company and that’s still our core business. But as we invested money in research and development, and introduced new diagnostic tests and systems, we found ourselves disappointed by the take-up. National health systems and clinicians were very slow to adopt the new products, even when we had shown clinical utility beyond a shadow of a doubt.

“We thought people were losing their lives because professionals would not change their clinical pathways, and so we began to look at what else we could do.”

Randox Laboratories, which FitzGerald established in 1982 in a converted henhouse at the back of his parents’ home near Crumlin, sold its first ever diagnostic blood test to Aberystwyth University Hospital. Earlier this year, the company made its billionth pound sale to a client in Saudi Arabia.

Randox is now ranked as one of the world’s leading diagnostic manufacturing companies with more than 2,000 products, including cholesterol tests and clinical chemistry reagents. It is estimated that more than 5 per cent of the world’s population – in excess of 370 million people across 145 countries – annually receives medical diagnoses using Randox products.

The group, which last year recorded pretax profits of £12.7 million (€14.2 million), has four manufacturing and research and development sites in Crumlin, Dungloe in Co Donegal, Bangalore in India, and Washington DC. It employs some 1,400 people globally and currently exports more than 95 per cent of its products worldwide.

“We’ve found that once people know who we are and what we do that they are very interested in using our services,” FitzGerald says. “It is actually an easy sell when you’re talking face to face with someone but harder to get that message across to large numbers of people. So things like the Grand National deal are helping with that.”

Another helpful factor is people’s increasing interest in their own health. “It is a very exciting time in life sciences because as well as technological developments, people are becoming very conscious about their wellbeing and are increasingly demanding that the health establishment be more innovative.

“There have been leaps and bounds in terms of what can be found,” he adds. “And the key is often in finding things such as nutritional deficiencies and hormonal abnormalities, that if treated early enough don’t lead to chronic or acute disease for many years.”

He puts the worth of the the global diagnostics market at about $70 billion (67.3 billion), which seems somewhat puny next to therapeutics, which is valued at about $800 billion (€770 billion).

“The market is growing by between 35 per cent a year currently,” FitzGerald says, “ but I feel there should be more recognition of diagnostics because people are often given medical intervention before being diagnosed correctly. To diagnose accurately in the past was an issue, but I’m not sure if that’s why there is still a discrepancy or because the drugs sector is simply better at marketing than we are.”

A small town in Northern Ireland might not seem like the natural home for a global medical diagnostics company, but FitzGerald has no regrets about choosing to set up Randox in Crumlin.

“I always liked medical research and, having done a PhD in London, I felt the only way to stay involved in it was to start my own company. I came back home and was at Queens for a few years focusing on multiple sclerosis while looking for things to manufacture.

I discovered the market for laboratory diagnostics and invested what little money I had into building a lab at the back of my parent’s home, and spent the next few years trying to get products into hospitals, with any profits being ploughed straight back into R&D.”

FitzGerald says he chose to “set up in an environment I knew because I felt there were so many things I needed support with, not just from family, but from the wider community. I thought it was a good place to start out and I think that’s proven to be the case.

“If I’d have set up in London I’d have probably needed to take venture capital in, which would have meant Randox became something different to what it is, because there have been many times when there’s been no possibility of giving a return – and most investors would not have liked that.”

If anything, being based in the North made the company work that bit harder, he says.

“Obviously we had the Troubles here, and so some people were quite sceptical about us, which meant it took more work to convince clients of our worth. In a way, that was all to the good because it made us sharper by pushing us to make sure we delivered no matter what was happening.

“Being in Northern Ireland also forced us into exports quickly, with our first deal in the Netherlands in 1983, followed quickly by one in the US.”

Randox began by developing diagnostic products for which there were direct competitors, but it soon focused on producing its own solutions. The company has invested more than £220 million (€2.6 million) in R&D since 1992.

“About 10 years after I started the company, we had accumulated some money in the bank,” FitzGerald recalls. And I felt that, while it was nice, it wasn’t really our raison d’être. We may have the wrong strategy, but instead of just focusing on products that are revenue-generating, we try to come up with something that will benefit patients.”

Around that same time, he continues, “I thought about putting multiple tests on a microchip and the development process to achieve this started from then, with a lot of investment going into the technology and manufacturing systems for it. It has been a long journey, and if we weren’t a private company I’d have probably been sacked many years ago because of it.”

Despite its location, Randox’s founder says recruitment has never been an issue, even during the height of the Troubles. He does admit to being concerned about how Brexit might affect his workforce.

“We’ve always had a very diverse workforce,” he says, “and the Troubles never impacted on us because our employees are largely made up of young, educated people who just want to get on in life. Currently we have staff of 44 different nationalities working for us, and our main worry about Brexit is how it might impact on recruitment.

“Many staff members were very worried when the result was announced and we’ve had meetings to discuss what we think might happen and to try and reassure them.

FitzGerald is 66, but he has no interest in retiring. If anything, he is seems energised about what the future holds for his company.

“We’re working on a lot of exciting developments, particularly in the area of strokes, where we’ve patents that can differentiate between different types. We’re just working on a delivery mechanism for that currently. Chronic and acute kidney disease is another key area for us.

“I’m very optimistic about what lies ahead. I’d like to think that within the next five years we’ll have got through to many consumers about the importance of getting tests done to improve their wellbeing. I’d also hope that we’ll be a much bigger company, with double the number of people working for us than we currently have.”

Something you might expect: FitzGerald usually works 12-hour days and is often in at the weekend, but doesn’t think he is a workaholic.

Something you might not expect: He is a keen polo player.