Johnson and Johnson to buy biotech Momenta in $6.5bn deal 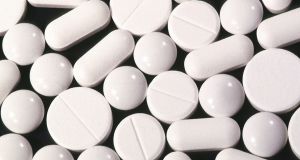 Momenta Pharmaceuticals shares were up almost 70 per cent in pre-market trading, almost equal to the premium offered by Johnson and Johnson. Photograph: Jeff Overs/BBC via Getty Images

Johnson and Johnson has agreed to buy biotech Momenta Pharmaceuticals for $6.5 billion (€5.5 billion) in an all-cash deal that will expand its portfolio of treatments for autoimmune disorders.

Momenta shares were up almost 70 per cent in pre-market trading, almost equal to the premium offered by Johnson and Johnson, which agreed to pay Momenta shareholders $52.50 per share.

With the deal, Janssen Pharmaceuticals, the drugmaking division of Johnson and Johnson, will get access to the Cambridge, Massachusetts-based company’s pipeline of drugs. That includes nipocalimab, a treatment developed by Momenta that in June received a rare paediatric disease designation from the US Food and Drug Administration.

“The acquisition was driven by the significant opportunity seen in nipocalimab, along with the scientific capability Janssen is acquiring with the Momenta team,” Johnson and Johnson said in a statement.

It is among the largest deals struck by Johnson and Johnson, which last year acquired robotic platform Auris Health for $3.4 billion. The company is facing lawsuits alleging that its products played a role in the US opioid crisis. There are also concerns about legal liabilities over its baby talcum powder following claims that the product may cause cancer.

Big pharmaceutical companies are increasingly focused on rare disease treatments, an area that relatively few have expanded even though it offers higher-margin products than mass-market drugs.

Johnson and Johnson’s deal follows a similar move by the French pharmaceutical group Sanofi, which on Monday said it had agreed to buy San Francisco-based Principia Biopharma in a $3.4 billion deal. – Copyright The Financial Times Limited 2020