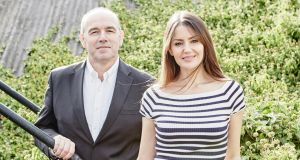 A Dublin start-up that specialises in data mining food to improve health has raised $3.2 million.

The fundraising by Nuritas was led by Singapore-based New Protein Capital, a food and agro-tech investment firm, and involved investors across three continents, including Silicon Valley-based angel investor Ali Partovi, who was an early investor in both Dropbox and Facebook.

Essentially, Nuritas uses big data techniques to discover peptides – molecules in food and food byproducts – that can be used by the life sciences sector in supplements and new drugs. It says it can find these peptides 10 times faster than with conventional research means and with 380 times more predictability of discovery and for one thousandth of the cost.

Nuritas has already developed and patented health-improving ingredients that can address global challenges as broad as inflammation, diabetes, ageing and MRSA, amongst others.

The company was founded by Trinity-trained mathematician and bioinformatics specialist Nora Khaldi in 2013 and subsequently spun out of NovaUCD’s Venture Launch Accelerator Programme.

Emmet Browne, former regional president of Pfizer was appointed chief executive earlier this year. Mr Browne was previously the managing director of Wyeth Pharmaceuticals in Ireland, before going to to become regional president at Pfizer. He then oversaw the integration of Pfizer nutrition into Nestlé in 2012..

“I was told this was impossible and I decided not to listen,” said Dr Khaldi, “I built a team who believe in what we do and together we made it happen. We have discovered and patented some incredible life-changing ingredients and we will discover many more.”

“A ground breaking technology, scalable solutions and the ability to use big data mining to identify new natural health-benefiting ingredients for food and other areas, perfectly fits in the ecosystem of companies NPC has invested and is looking at investing in in the future,” he added.

“We are delighted to collaborate with such like-minded and visionary investors to help us accelerate the discovery revolution that we have already started. We share the same vision,” Mr Browne said.