As well as the funding from a group of Irish investors, Isodiol is providing €1.25m 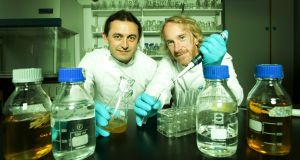 The company, which primarily focuses on exploring the “full potential of cannabis and cannabinoids as a medicine”, secured the phase-two funding from a consortium of private Irish investors. It follows an initial €100,000 seed investment.

The new funding will enable the company to “further progress” its Irish and UK research in advancing medicines using cannabis extracts (cannabinoids) and other plant-derived molecules to treat a variety of illnesses.

In addition to the Irish investment, Swiss-American firm Isodiol has committed €1.25 million in CBD hemp oil products over a five-year period to assist GreenLight in cultivating its research studies within Irish universities.

Isodiol has also agreed a five-year research contract with GreenLight so as to further validate the CBD medicines they have already developed in the US.

Founder and chief executive Dr James Linden said there was “mounting evidence” that cannabinoids are an “effective form of treatment for many illnesses”, including Multiple Sclerosis (MS), glaucoma, arthritis, epilepsy and cancer.

“GreenLight’s focus is on conducting research that will be the catalyst in bringing these life-changing medicines to fruition; that have the potential to help thousands of people manage their conditions,” he said.

“Pre-clinical and clinical trials are crucial in furthering diagnostics and treatment of illnesses,” he said. “Bringing a medicine through the approval process, from research and clinical trials to being available to patients, is an extremely in-depth process and costs millions.

“Clinical trials are generally five years in duration, costing in the region of €7-€10 million per drug, therefore seed and phase-two investment has been essential in driving GreenLight’s vision forward.

“In early 2017, we will be conducting our third call for investment funding and, due to the heightened awareness in cannabinoid benefits and research, we’ve already received a great deal of interest from additional investors.”