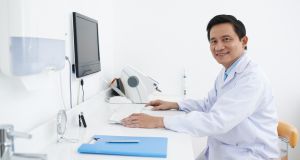 The doctor will see you now: GP-Online is set to be rolled out shortly

A new service that enables GPs in Ireland to provide live consultations with patients through smartphones and tablets is to be launched shortly.

GP-Online, which has been developed on behalf of the National Association of General Practitioners (NAGP), will allow patients to consult with doctors on a wide range of medical issues simply by logging on.

The service is to be formally unveiled at a conference later this month with the service set to be rolled out in the second quarter.

It is hoped that the new service will cut down on waiting queues to see GPs while also making it easier for patients who are unwell and/or immobile to seek medical attention.

GP-Online will initially only be available for private appointments, though the NAGP said it hoped to extend the service for general appointments in the future.

The cost of the new service to patients will be set by individual GPs, but is expected to be considerably lower than the current cost of an appointment, which varies from about €30 to €65.

“While medicine and how we treat patients has dramatically evolved and improved over decades, the fundamentals of the support and care GPs offer patients have not changed. However, technological advancements have meant that how we communicate and interact with our patients and vice versa is changing rapidly, and those patient-driven changes will impact how GPs deliver their primary care service in the future, said Dr Michael McConville, director of the GP-Online project.

“The new service will be very convenient for patients short on time, but will be particularly useful for those that are immobile and unwell as it will mean that they will not have to leave their own home,” he added.

GP-Online will be 50 per cent owned by the not-for-profit NAGP with over 100 GPS also expected to invest in the new venture.