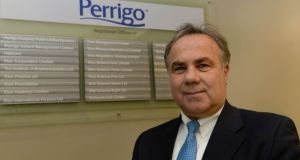 The quarterly net loss includes an impairment charge of $185 million.

On an adjusted basis, the company earned $1.80 per share, compared with average analysts’ estimate of $1.93 according to Thomson Reuters I/B/E/S.

Total GAAP operating expense rose to $653.3 million in the quarter, from $199.4 million a year earlier.

Revenue rose 33 per cent to $1.42 billion, but missed analyst estimates of $1.46 billion, for the fourth quarter.