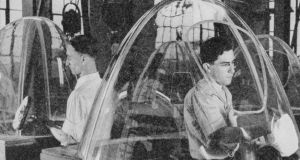 For most of the 20th century Imperial Chemical Industries (ICI) was Britain’s leading industrial company. It was formed in 1926 through the merger of four chemical companies – Brunner Mond, Nobel Explosives, United Alkali and British Dyestuffs.

The company declared that it would champion “the responsible application of chemistry and related sciences” to business. The chemical markets of the world were shared, more co-operatively than competitively, between ICI and its rivals DuPont and IG Farben.

After the second World War, the ICI board shrewdly perceived that the new frontier of chemistry was pharmaceuticals.

In those days, ICI was one of the few British manufacturing companies active in recruiting graduates, and the pharmaceutical division hired a team of able young scientists. Among them was James Black, a physiologist from the University of Glasgow.

Despite the quality of its research chemists, ICI’s pharmaceutical division lost money for almost two decades. It is hard to imagine a listed company, or its shareholders, tolerating a similar financial performance today.

Black was feted (if not especially well paid) by the company. But his interest was in research, not management or marketing. Believing that the science underlying beta-blockers had other uses, he left ICI for the greater freedom offered by Smith Kline.

Black’s hopes were realised. His team found a drug, Tagamet, which relieved many people from the misery of stomach ulcers. This discovery prompted another British company, Glaxo, to focus research in the same area. The product of that research was Zantac, for a time the world’s best-selling drug.

ICI’s visionary investment in pharmaceuticals did not just pay off for the company itself. It laid the foundations of what is today one of Britain’s most successful industries.

By the late 1980s, fashions had changed. The purpose of business was now the promotion of shareholder value rather than the responsible application of science.

No longer in vogue
ICI had shifted its emphasis over the years from its origins in dyestuffs and explosives to petrochemicals and fertilisers, and then to pharmaceuticals. But businesses that focused on exploiting specialist scientific knowledge were no longer in vogue. Sprawling conglomerates such as Hanson, with management skills that could supposedly bring efficiencies to any business, were the companies of the future.

In 1991 Hanson was thought to be preparing a hostile bid, and the threat galvanised ICI. Two years later the pharmaceutical business was spun off as Zeneca. An independent drug company, after all, could command a far higher stock-market valuation than the cyclical chemical businesses that ICI retained.

Zeneca subsequently merged with the Swedish company Astra (whose proton pump inhibitor had become the successor therapy to Zantac). The rump chemicals business of ICI began a 15-year journey to oblivion.

The pharmaceutical industry itself was changing. When business guru Jim Collins wrote Built to Last in 1995, he compared the continuing success of Merck – repeatedly named the most admired US company in Fortune surveys – with the inferior financial performance of its competitor Pfizer.

‘Medicine is for the people’
Collins contrasted the philosophy of George Merck (“We never forget that medicine is for the people . . . and if we have remembered that, [the profits] have never failed to appear”) with the words of his contemporary John McKeen at Pfizer: “So far as is humanly possible, we aim to get profit out of everything we do.”

But by the time Collins’ book appeared, Pfizer’s strategy of cutting costs, promoting its suite of existing drugs and filling gaps in its pipeline of new drugs through acquisitions better fitted the changed times. Merck fell from grace. When Collins came to write How The Mighty Fall 15 years later, Merck was again among his featured businesses.

Business built to last is about people and products, not corporate activity and tax advantages. James Black almost certainly created more shareholder value than any financier or chief executive in the history of British business. That lesson should be relevant to how we view Pfizer’s proposed acquisition of AstraZeneca. – (Copyright The Financial Times Limited 2014)