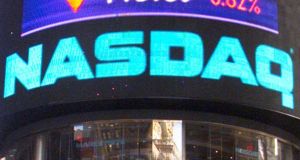 The fastest start to a year for US biotech initial public offerings is stoking fears of a bubble amid fears investors are taking increasing risks on companies at the earliest stage of medical research.

Another eight biotech companies raised a combined $502 million in US listings last week, setting a weekly record for the sector and continuing a boom that has seen the Nasdaq biotech index rise by more than two-thirds in the past year.

However, fears of overheating are growing as companies come to market at an early stage of drug development when failures are high – and in one case without the usual restrictions that bar existing owners making a quick profit on IPOs.

The recent listing of Dicerna Pharmaceuticals, which raised $90m in late January and saw its shares surge 207 per cent on its first day of trading, is becoming a focal point for concerns.

The Massachusetts-based company has yet to enter clinical trials for the liver disease and cancers it seeks to treat, which typically means it has a less than 5 per cent chance of one day getting a drug to market, according to industry analysts.

In its prospectus, the company said that it would not subject majority shareholders from agreeing to long-term restrictions on their entire holdings – a common feature of almost all IPOs designed to align the interests of existing and new investors.

“I’ve never seen an IPO in my career where the existing [majority] shareholders . . . were not subject to a lock-up,” said one senior capital markets expert, who added that other companies planning IPOs have since inquired about following Dicerna’s example.

Michael Zeidel, a partner at Skadden Arps, said: “A 180-day lock-up is one of those check-the-box provisions for investors.”

Shares in Dicerna have dropped by a third from its first-day closing price though it is not clear if its main investors, including the venture capital arm of GlaxoSmithKline, have sold eligible portions of their holdings.

The prospectus warned that about 7 per cent of existing shares could be immediately sold and 93 per cent within 90 days. “The sale of a significant number of our shares may cause the market price of our common stock to drop significantly,” it said.

A person close to the transaction, which was underwritten by Jefferies, Baird and Stifel, defended the arrangement: “What makes this situation unique is that insiders ended up buying about 50 per cent of the offering, so there was a real shortage of stock to go around and we figured not having a lock-up would facilitate after-market liquidity.”

Investors have been attracted to the biotech sector by a fresh wave of scientific innovation and hopes that some of the latest market entrants can emulate the success of companies such as Biogen Idec, Gilead and Amgen, which have grown into multibillion-dollar drugmakers.

But while new IPOs have kept coming at a ferocious pace, there are signs that investor appetite may be weakening. Of the 14 companies to list this year, six are currently trading below their issue price. “I think the IPOs are a little stretched,” said Brian Skorney, an analyst at Baird.

John Carroll, editor of industry newsletter FierceBiotech, said: “The investment community still has enough appetite for risk to send a select group of these new IPOs over the range, but . . . they’re getting choosy.

“Inevitably, you’ll see more high-risk IPOs without a good story to tell come along to see if they can make it through this window, and it will get harder. When the inevitable crunch comes, it will be painful.”

The boom has so far been concentrated in the US, with several European companies, including Oxford Immunotec and GW Pharmaceuticals of the UK, crossing the Atlantic to join Nasdaq. UniQure, a Dutch gene therapy specialist, was among last week’s crop of US IPOs, raising $81.9m.

However, European markets could be about to catch the biotech bug. Circassia, a UK company developing allergy cures, last week announced London’s biggest IPO in the sector for years. – Copyright The Financial Times Limited 2014