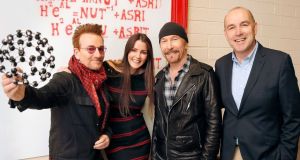 U2 band members Bono and The Edge have been confirmed among a list of high profile investors at Dublin food technology start-up Nuritas.

Confirmation of their involvement in a €2 million fundraising earlier this year came as the company announced plans to treble its workforce.

Nuritas said it expects to bring its Irish workforce up to 60 people next year as part of a major expansion of its operations. The company will also hire more people at its US base in San Francisco which it opened earlier this year.

Nuritas uses big data techniques to discover peptides – molecules in food and food byproducts – that can be used by the life sciences sector in supplements and new drugs.

Its technology allows it to discover peptides up to 10 times faster than traditional research techniques and at a fraction of the cost.

The latest announcement follows the award to Nuritas of €3 million in EU funding to trial and market a peptide it has discovered to prevent people who are pre-diabetic progressing to full blown Type 2 diabetes.

The Dublin company, founded in 2014 by Trinity maths graduate Nora Khaldi, is rolling out a series of clinical trials over the next 18 months with the aim of having the peptide integrated into food products in the market by 2020, subject to regulatory approval.

Bono and The Edge were both early investors in Facebook and Dropbox, amongst other companies, and are the latest high-profile investors to be confirmed by Nuritas as part of a €2 million seed round investment earlier this year. They join Salesforce founder and chief executive Marc Benioff, and Ali Partovi, a US tech entrepreneur and angel investor, who was also an early supporter of Dropbox and Facebook.

“When we first started talking with Nuritas, I was blown away with how their ideas could be used to significantly improve the health of billions of people globally,” said The Edge, speaking from Nuritas’s Dublin headquarters. “We want to bring forward and support innovative, world-changing ideas so this is a perfect fit.”

Nuritas chief executive Emmet Browne said he was “thrilled to have them on board and they have already provided enormous support and enthusiasm, proactively connecting and opening doors to help our growth and expansion”.