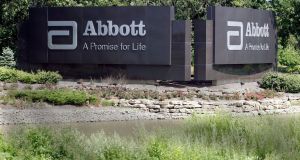 Abbott Laboratories made a net loss in Q3 after the value of its stake Mylan NV slumped as the stock dropped in recent months. Photograph: Danish Siddiqui/Reuters

Abbott Laboratories posted a surprise third-quarter net loss after the value of its stake in EpiPen maker Mylan NV slumped as the stock dropped in recent months.

Abbott became Mylan’s biggest shareholder last year after selling its generic drugs unit in Europe and developed markets to the drugmaker, and still holds a 13 per cent stake.

As Mylan became embroiled in public outrage over the rising price of its EpiPens, the stock slumped 10 per cent in September alone, causing a $947 million writedown in Abbott’s third quarter.

Abbott’s shares declined 1.5 per cent to $40.54 in morning trading in New York on Wednesday. The medical-device maker has also been grappling with problems that cropped up at two companies – Alere and St Jude Medical – that it has agreed to acquire.

Excluding the Mylan writedown, Abbott’s earnings of 59 cents a share beat analysts’ predictions of 58 cents, on average, helped by rising demand for its generic drugs and medical devices.

The company also said in a statement that it narrowed its profit forecast for the year to $2.19 to $2.21 per share – in line with the $2.20 anticipated by analysts.