Focus should be outcomes not ambulance response times - Varadkar 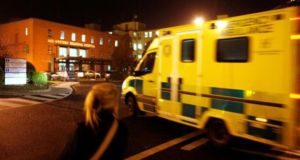 The Irish Times reported on Tuesday that the confidential report commissioned by the HSE had concluded that Ireland was too rural to support an ambulance service to compare with the service in England and to meet official targets for response times.

The existing system of measuring ambulance response times should be abolished and replaced by one that focuses on the outcome for the patient, the Minster for Health Leo Varadkar has said.

The Minister confirmed a new independent report carried out by overseas experts had shown that targets for ambulance response times set by the health watchdog HIQA “cannot be met even with a major increase in ambulances”.

Mr Varadkar said Government’s aim was to provide an ambulance service for rural areas which saved as many lives as possible, rather than ticking boxes which did not reflect reality.

The Irish Times reported on Tuesday that the confidential report commissioned by the HSE had concluded that Ireland was too rural to support an ambulance service to compare with the service in England and to meet official targets for response times.

The report states that Ireland’s “high rurality”, and the fact Irish people are less than half as likely to call an ambulance than people in England, means the cost of running the service in Ireland is significantly higher by comparison

The report questions the policy of the National Ambulance Service (NAS) of bringing all patients to hospital emergency departments and says many other countries adopt an initial “see and treat” approach to patient care instead of simply taking them to hospital. In England, up to 50 per cent of patients are dealt with in this way.

The report maintains that providing extra resources would result in very little improvement in performance in rural areas.

It says improvements would cost significant amounts of money; hiring an extra 290 staff would cost €15 million a year and take three years to implement. Even then, improved response times may not yield a commensurate improvement in clinical outcomes for the majority of patients who are not time-critical

The Minster said: “”Rather than treating the clock, our goal should be to treat the patient. The problem with current targets is that they focus only on response times, rather than outcomes. This means that a response within 8 minutes, even where the patient dies, is regarded as a successful outcome. However, a response within 12 minutes, where the patient survives, is regarded as a failure. That makes no sense and should be amended.”

“He said That’s why we have established an air ambulance service for Ireland. Rapid response vehicles bring advanced paramedics and doctors to emergencies to provide rapid treatment before the ambulance arrives. We are expanding the number of community response teams - there are already more than 100 - to provide a rapid response outside of urban areas. This is a much more realistic approach to providing an emergency response outside of urban areas.”

He said he had asked the HSE to draft an action plan when the final ambulance service report is published in the near future.

The trade union Siptu called on the HSE to publish immediately the report on the capacity of the national ambulance service.

Siptu health division organiser, Paul Bell, said his members were had been deeply concerned about the direction of the ambulance service and demanded a capacity review from the Government in February 2014. He said from the reports published in The Irish Times the concerns of the trade union had been completely vindicated.

“We are short 290 highly skilled ambulance professionals who are needed to give life saving treatment to sick and vulnerable citizens. This is unacceptable. Reports in the media today drawing on an independent review of the ambulance service suggest that the key performance indicators set out by HIQA in 2011 were unrealistic and flawed due to the failure to carry out a full capacity review before they were set.”

“If the National Ambulance Service is to function at the level that HIQA is demanding, and the public deserve, then the Minister for Health, Leo Varadkar, needs to invest in recruitment, resources and conduct a review into how to develop an effective strategy for community first responses.”

“The time has come for the Government to stop moving from one health crisis to another. It needs to provide leadership and the public with confidence that the national ambulance service is safe, fully resourced and fit for purpose.”

Roscommon TD Denis Naughten TD said ambulance service management should not “throw in the towel on rural Ireland on foot of a flawed ambulance capacity review”.

“This report, which seems to base its conclusions on England, is not comparing like with like, and suggests that even with resources, only 64 percent of emergencies can have a first responder at the scene of the incident within 8 minutes”.

“Yet in Scotland, 74.7 per cent of responses there were within the eight-minute target in 2012-13. In Northern Ireland their target for responses within eight minutes is 72.5 per cent, with a minimum target not less than 65 percent in any area. Yet this report is stating that we cannot achieve that here”.

“The fact is that every delayed ambulance, potentially leads to the loss of a life, and geography should not determine if you should live or die”.

He said it was amazing that even though the ambulance response time figures were highlighted at the time that the Government was closing the smaller emergency departments, “we were assured that we would have a “world class” ambulance service”.

“We now find that these communities are to be completely abandoned and the clear policy agenda across all State agencies is to forget rural Ireland, because saving money is now more important than saving communities or lives”.