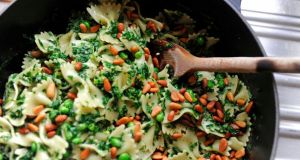 To say: “Oh dear this pasta is disgustingly soggy” simply draws the guests’ attention to how overcooked it is, which otherwise they might not have noticed. Worse, it then obliges them to say: “But no! It’s delicious.” Photograph: DAVE MEEHAN

Last week I had a drink with a woman who has just landed one of the biggest jobs in her industry. Over a couple of grapefruit negronis she told me she had no idea why she had been promoted and that she was not even sure if she wanted the job.

In return I told her that I was bumbling along more or less okay, though keeping the show on the road was getting increasingly tricky.

When I got back from this pleasant evening of mutual self-disparagement my younger son informed me that I had just failed to show up to at an event at his school.

He also said that a friend of mine, a barrister with a child in the same class who has form when it comes to missing school events, had gone along.

She texted back: “The prize will not be yours for long. Give it a week, maybe 2, and it will be mine again.”

What is the matter with us? All three are grown-up women who mainly cope fine at work and at home. Yet we insist on inflating our failures in an endless game of self-deprecation.

There was a study of women on the boards of big UK companies showing they are four times as likely to engage in self-deprecation as their male colleagues, with the result that they are seen as weak.

But to conclude that self-deprecation is bad and must be stamped out is all wrong. It is just a matter of using it right.

A few years ago academics at the University of New Mexico wrote a paper with the charming title, Dissing Oneself Versus Dissing Rivals.

It proved that men who crack self-deprecating jokes make themselves irresistible to women – but only if they are alphas to start with.

When a low-status man disses himself, women are repulsed. If he jokes about being useless, women conclude he must therefore be useless.

Even though the research was aimed at the bedroom, it works just as well in the boardroom, or in any office at all. It applies equally to men and women, although gives the British an advantage as self-dissing is something for which we have an inbuilt genius.

So long as there is no doubt about the status and superiority of the person using it, self-deprecation is one of the most effective tools there is.

It disarms other people, makes them forget you are scarily powerful and lulls them into liking you instead. The only boss I’ve ever had whom I truly adored self-deprecated constantly.

Between women friends it acts as a non-compete clause.

I don’t actually think for a minute that I’m the worst parent in the UK: If I did, I’d keep quiet about it. But by telling my barrister friend that I am, what I’m actually saying is: I’m not dangerous. Come closer.

Modern-day masters
The more ludicrous the self-dissing is, the better it works. Think of some of the modern-day masters: Tony Blair, Boris Johnson or Justin Welby, the Archbishop of Canterbury.

When I interviewed the latter recently, he told me that he was hopeless compared with his predecessor, that he was boring, not terribly holy, had a second-class mind and that he got terrified before big speeches. In a way it was all hogwash. Yet it made me putty in his hands.

Self-deprecation is only dangerous if there is any chance at all that the person you are talking to might agree with it.

I learnt this from my mother. Even though she never managed to teach me how to cook, she did warn me never to diss the food I had just put on the table.

To say: “Oh dear this pasta is disgustingly soggy” simply draws the guests’ attention to how overcooked it is, which otherwise they might not have noticed. Worse, it then obliges them to say: “But no! It’s delicious.”

Self-deprecation that demands a contradiction is never okay. It boils down to neediness, which is always tiresome.

This shows where all those women in boardrooms are going wrong.

The men there are not yet convinced that what they are producing isn’t the boardroom equivalent of soggy pasta.

Only when it is clear to everyone that a woman’s skill is beyond doubt will it be time for her to start telling everyone that she is useless.
– (Copyright The Financial Times Limited 2013)