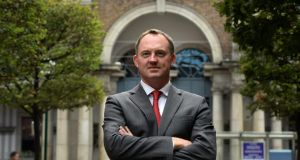 John Bohan: “There have been so many pyramid schemes for investment. There hasn’t been proper regulation in some cases or oversight. A fund administration company provides that oversight.” Photograph: Cyril Byrne

Ireland is known for a lot of things – Guinness, leprechauns, the Celtic Tiger – but in financial circles hedge funds are the words on everyone’s lips. Apart from a slight fall in 2009, the Irish funds industry has grown year on year for the past 25 years, and today Ireland is the number one hedge fund administration centre in the world, servicing more than 40 per cent of all global alternative investment funds.

At the centre of this industry lies Apex Fund Services. In the 10 years since its inception, it has become one of the world’s largest independently-owned fund administration companies, with approximately $25 billion in assets under administration and 32 offices across the globe.

The company was founded by Peter Hughes in Bermuda in 2003. He asked Irish chartered accountant John Bohan to join him in building an independent fund administration outfit.

“We started on a shoestring budget in a 4ft by 6ft office. We got all our furniture second hand but didn’t have the money for technology. Any time we needed to value a portfolio, we had to walk down to the local HSBC and use their Bloomberg machine,” Bohan says.

Bohan had moved to Bermuda in 2001 to work for small company in fund administration. He quickly discovered the country was like a mini-Ireland.

The company opened its second office Dubai in 2006, becoming the first administration services company to be authorised by the Dubai Financial Services Authority, and established a European headquarters in Cork in 2007.

“I came back to Ireland eight months before the Lehman crash and chose to set up in Cork as the costs of setting up a business in Dublin at that time were huge. Property and real estate prices were at their peak and there was massive competition for staff.

“I couldn’t believe what I had to offer to get staff. They all wanted company cars and great gym memberships or they wouldn’t work for us.”

The following year – 2008 – was perhaps the most difficult for Bohan and Apex, with the global financial crisis beginning to show its effects. In September 2008, in the face of impending collapse of the domestic banking sector, the Irish government gave a blanket guarantee not only to depositors but to all bondholders of the country’s six main banks.

That same month Lehman Brothers filed for bankruptcy following drastic losses in its stock, a mass exodus of clients and devaluation of its assets by credit rating agencies.

“Lehman had a massive impact on the flow of business. In the six months prior, business was huge. In the 12 months after, we had negative growth. We had just signed a lease for an office building in Dublin and hired lots of staff.

“We had had five years of boom times. When 2008 hit, we had 13 offices open. We had done incredibly well in a short space of time. We suddenly had huge exposure and it was all personal exposure.

“We had low revenues coming in from the US and Europe and so had to rely more on emerging markets to grow the group. We took a 25 per cent drop in assets as well as a drop in revenue.”

Online media
With all their money invested in the company, Bohan and Hughes had no choice but to look for new markets and to expand their business offering. At the time, the company’s core business involved the provision of fund administration solutions, but it branched out, launching an investment management arm in November 2008 to provide services to both offshore, unregulated and onshore, regulated funds.

To date, this division has $125 million in assets under management, with platforms in Bermuda, Cayman, Delaware US, Luxembourg, Channel Islands, Malta and Ireland.

“We did around 125 flights a year in 2008-09 meeting lawyers, auditors and investment managers, and trying to drum up new business. We worked 12 hours a day, seven days a week and spent half the year either on a plane or at the airport.

“We tried to offer products other banks weren’t offering. We quickly adopted the use of online media and SEO [search engine optimisation] so we could bring our company higher up in the results lists of internet search engines, writing lots of articles and speaking at lots of conferences. It was all about visibility both online and in person.”

The financial crisis continued with the Madoff investment scandal breaking in December 2008, when Bernie Madoff admitted the wealth management arm of his business was an elaborate Ponzi scheme, and Anglo Irish Bank chairman Sean Fitzpatrick and David Drumm resigning following the revelation of details of the scale of the bank’s own troubles.

However, the lack of regulation and oversight that led to the financial crisis also helped propel Apex into its current position. Investors fearing pyramid and Ponzi schemes sought out independent hedge administration companies which offer watchdog services.

“A lot of capital was being withdrawn from the markets in 2008 and there was a huge outcry for better regulation. We benefited from that as investors refused to put money in places without regulation.

“Post-Madoff and other collapses, a lot of institutions investing into hedge funds insisted on a third-party fund administrator. We benefited from that.”

Despite being a “hub” for hedge fund administration, the majority of people including those who work in the Irish financial services sector don’t fully understand how hedge funds work, according to Bohan.

He says hedge funds are investment schemes, while hedge fund administrators are like watchdogs providing oversight of those schemes. “We are engaged by investment managers to examine and value portfolios, and make sure the fund is compliant with regulation.

“There have been so many pyramid schemes for investment. There hasn’t been proper regulation in some cases or oversight. A fund administration company provides that oversight.”

In April 2011, Apex secured a $30 million capital commitment from FTV Capital in return for a minority equity stake, something which has helped with the expansion of the company. In the two years since, it has opened offices in Miami, Guernsey and Uruguay.

There are of course challenges to having offices worldwide, with each country being subject to different regulation, weather and political circumstances.

“In mainland China, they regulate internet lines and speeds. Things happen at a much slower pace at our offices there as a result,” Bohan says.

“Our offices in Bermuda have been hit by hurricanes on several occasions. We have to have generators in place as often the electricity is cut off for several days. Thankfully we have a robust disaster recovery plan in place there, which has been key to our stability.

“We had to go through an Arab spring rising in Bahrain. We enacted our disaster recovery plan when Saudi starting sending tanks over to Bahrain. There were rioters outside the office and staff were concerned. We evacuated some staff from the region and relocated them in other offices.”

Last year, Bohan was shortlisted for the Ernst & Young Entrepreneur of the Year award, which he says increased his awareness of the concept of corporate social responsibility.

The company took the award for world’s most innovative fund manager in the “under $30 billion” category last year, and was also recognised in the service provider rankings, produced by the global publication Hedge Funds Review, as the number two hedge fund administrator worldwide.

Bohan attributes good staff, a “code of accessibility” and numerous offices worldwide to the company’s success.

While many competitor hedge fund administration firms operate out of a central global hub Apex prefers to send personnel to where the business and customer is at, believing real contact is more important that virtual contact.

The desire always to provide real contact is also one of the company’s unique selling points, with the code of accessibility meaning a client will always be put through to someone.

“When we started the company, we wanted one point of contact. We didn’t want the client phoning and going to voicemail. They go directly to the person looking after their account or their teammate. We have no generic email responses and all emails are answered within a four-hour period.”

Bohan believes the future of the company is looking bright, especially thanks to the Alternative Investment Fund Managers Directive, an EU directive which came into force in July. “That will create a lot of additional business for us.”

1 Fianna Fáil may have just pressed the pause button on the property market
2 UK to prioritise EU trade deal over one with United States
3 Who are Ireland’s 17 billionaires?
4 My father in a nursing home wants to gift me his house
5 Are there annual limits on inheritances or gifts to a child?
6 Eason puts Blanchardstown store on market at €16m
7 State ranked highly for attracting skilled workers but low on gender equality
8 CVC must reveal Six Nations interest before Pro14 bid
9 London fintech company Nuroco to expand here
10 Belfast regeneration project worth £500m gets green light
Real news has value SUBSCRIBE