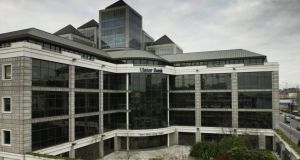 A report into Ulster Bank’s treatment of SME debtors during the recession has cleared it of allegations that it was involved in “systematic and institutional behaviour” to put otherwise viable businesses on a “journey towards administration, receivership and liquidation”.

The 75-page report by Irish law firm Mason Hayes & Curran, which was commissioned by Ulster Bank, found that “on the contrary”, the evidence suggests that its “driving policy” was to manage its indebted commercial customers through the recession.

Ulster Bank “sought to keep faith with the customer, provided that it viewed the customer’s business as viable and was receiving co-operation”.

The report into Ulster Bank’s treatment of SME customers between 2008 and 2013 stemmed from the publication of the Tomlinson Report in the UK in November last year.

Tomlinson had investigated the lending practices of UK banks to SMEs, including Royal Bank of Scotland, Ulster Bank’s parent. The report accused RBS, and in some cases Ulster Bank, of deliberately putting customers out of business for profit.

RBS hired law firm Clifford Chance to carry out a review which cleared the bank of these allegations.

The focus of the Mason Hayes & Curran report was on the work of Global Restructuring Group Ireland (GRGI), a division set up to deal with SMEs who had borrowed between €1 million and €25 million and were in distress. About 76 per cent of loans moved to GRGI related to commercial property.

Ulster Bank provided Mason Hayes & Curran with a list of 1,965 customer “connections”, of which the law firm reviewed 32 files. This included customers who had made a complaint on a Tomlinson-related issue.

The lawyers contacted Mr Tomlinson to seek his assistance but he declined because of an ongoing review by the UK’s Financial Conduct Authority.

Mason Hayes & Curran met with five customers who had made allegations within the scope of the Tomlinson Report. The law firm concluded that while they “genuinely believed” they had been unfairly treated by Ulster Bank, their allegations were “not substantiated” following reviews of the files.