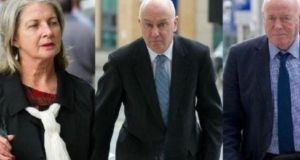 Three former Anglo Irish Bank officials have been jailed for between three years and 18 months for conspiring to conceal or alter bank accounts being sought by Revenue.

O’Mahoney, who was second in command at the bank, received a three year sentence. Daly was sentenced to two years and Maguire got 18 months.

All sentences are to begin immediately. Judge McCartan said it was clear the accused engaged in a deliberate and ongoing fraud to stop accounts linked to Anglo chairman Seán FitzPatrick from being disclosed to Revenue.

The judge called Anglo a “very sick bank” which “took a very, very dishonest approach to Revenue.” He said the accused’s actions were “done out of misplaced loyalty but were still dishonest and were against all good banking principle and practices.”

He said what occurred was a significant and deliberate fraud, one which was well-designed and which continued over time with the clear purpose of ensuring no information would emerge about the accounts linked to Mr FitzPatrick.

He acknowledged there had been no gain to the accused, who were acting under loyalty to their employer. Serving time would be harder for them because they were older, he added.

While they had cooperated with the garda investigation to the extent of meeting for interview and answering questions, these answering were self-serving and self-excusing.

Maguire, who was visibly upset during much of today’s hearing, closed her eyes as the Judge announced the sentence, while the two male executives seated beside her displayed no visible emotion.

The judge said this was a difficult case to deal with as it wasn’t often people with impeccably good character came before the courts. The challenge to the court was to balance the interests of the accused and the public interest.

Banking must be built on trust and honesty and cannot work any other way, he said.

It appeared Anglo had a very dishonest approach to its responsibilities to the Revenue or the community and contrived to present a picture of having to liability for DIRT tax.

When this lie was exposed by the tax amnesty, the bank’s reaction was to set up a task team to assist the Revenue audit but also to protect, silently and secretly, the bank’s chief executive.

He said the accused engaged in this scheme knowingly and wilfully and the team worked to ensure any potential embarrassment to Mr FitzPatrick would not emerge. While they acted out of misplaced loyalty it was still dishonest and against all banking principles.

“All of what occurred reflected the working of a very sick bank, in which the accused played their parts.”

Other people in the bank acted honestly and stood up to their superiors, he pointed out.

Earlier the court heard that there is no statutory maximum prison term for the charge of conspiracy as it is a common law offence.

The judge indicated he would treat the maximum term for all offences as five years as they all related to the same scheme.

The sentencing hearing began at noon on Friday during which the court heard a summary of the case from an officer from the Garda Bureau of Fraud Investigation.

The judge also heard defence arguments for a non-custodial sentence, including the fact that former Anglo chairman Sean FitzPatrick was the “prime-mover” and main beneficiary of the fraud and that none of the accused profited from it in any way.

Counsel for Daly, Sean Guerin SC, asked the judge to bear in mind that the case against Mr FitzPatrick, who has never been charged in relation to the fraud, was stronger than the one against his client.

He asked the judge to consider “the impunity that Mr FitzPatrick has been fortunate enough to meet in these matters”.

Counsel also said Daly, who was previously employed in the banking supervision division of The Central Bank, is acting as a co-operating prosecution witness in a separate case against Anglo Irish Bank.

Representing O’Mahoney, Brendan Grehan SC, said at the time of the offences his client was in line to succeed Mr FitzPatrick as chief executive of the bank but lost out to David Drumm who came from the lending side.

Counsel said O’Mahoney came from the “more prudential” treasury side of Anglo and he was “deemed not to fit in with the culture of the bank”.

Shortly afterwards he left and went on to head up a company which failed “disastrously” and “publicly” during the downturn.

He was forced to step down from the board of another company after he was charged with these offences.

Mr Grehan asked the court to remember that the bank itself was not on trial. He observed that “it’s a case that’s hard to divorce from the adverse publicity that attracts to anything with the toxic name Anglo or Anglo banker.”

Patrick Gageby SC, representing Maguire said, unlike her co-accused, she was never an officer of the company. He said she held the grade of assistant manager and no-one answered to her.

He also presented evidence of Maguire’s involvement in the Good Counsel GAA Club in Driminagh. He said she left Anglo in 2005 to care for her sick mother and has been unemployed for the last number of years. Daly (67) of Collins Avenue West, Whitehall, Dublin, O’Mahoney (56) of Glen Pines, Enniskerry, Co. Wicklow and Maguire (62) of Rothe Abbey, South Circular Road, Kilmainham, Dublin had pleaded not guilty to seven charges.

The charges alleged that in 2003 and 2003 they conspired to hide or omit accounts, connected to Mr FitzPatrick from Anglo’s Core Banking System (CBS) or from documentation provided to Revenue, who were conducting an investigation into bogus non-resident accounts which may have been liable for Deposit Interest Retention Tax (DIRT). There was a delay in taking the verdict on Thursday because of an anonymous phone call to the office of the DPP saying that the jury foreman’s wife was “very friendly” with Maguire. The judge decided it was a hoax call after the jury foreman denied the claim.