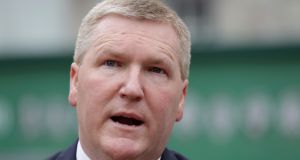 Finance Ireland’s launch of residential mortgage products will give consumers greater choice and shake up a market that is “far too cosy”, according to Fianna Fáil finance spokesman Michael McGrath.

The State’s largest non-bank retail lender announced a new range of fixed-rate and variable-rate mortgages, which the company will distribute through financial intermediaries.

Mr McGrath said the lender, which is led by chief executive Billy Kane, would boost competition.

“Up until now, the mortgage market in Ireland has been far too cosy with AIB and Bank of Ireland accounting for about 60 per cent of the market between them,” he said.

“The entry of Finance Ireland into the Irish mortgage market is a significant development and will afford consumers a greater choice when choosing where to take out a mortgage.”

The new entrant is competitive on fixed rates – offering the lowest rates in the market in many cases – while its 2.7 per cent variable rate for borrowers with a loan-to-value of less than 60 per cent also undercuts its competitors.

The variable rates for borrowers with a higher LTV than 60 per cent match the best ones previously available in the market.

Finance Ireland said it would contact mortgage customers annually and offer them lower variable interest rates if their LTV has improved.

“It is now vital that prospective mortgage holders shop around to see where they can get the best deal,” Mr McGrath said.

“Far too many mortgage holders are paying over the odds with their existing provider and they should look to switch their mortgage to wherever they can get the best deal. The Irish mortgage market desperately needs more competition to drive down mortgage rates which are the second highest in the euro zone.”