Backgrounder: Sean FitzPatrick allegedly did not want accounts to go to Revenue 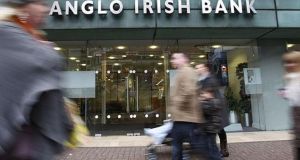 A search by the Revenue for the payment of Dirt on bogus non-resident accounts, that began in the late 1990s, has led to the conviction of three former officials of Anglo Irish Bank.

A search by the Revenue Commissioners for the payment of Deposit Interest Retention Tax (Dirt) on bogus non-resident accounts, that began in the late 1990s, has led to the conviction of three former officials of Anglo Irish Bank.

Anglo Irish Bank told them it had no accounts that fitted the criteria.

But when a Dirt amnesty followed, several Anglo accountholders came forward. Revenue followed up with a High Court order, in March 2003, requiring the bank to provide data on non-resident accounts, and it carried out an audit, beginning in October 2003.

Sean FitzPatrick, then the bank’s chief executive, allegedly expressed a wish that details of some non-resident accounts connected with him should not be supplied to Revenue.

The first charge, brought against O’Mahoney and Daly only, involved furnishing incorrect information to the Revenue Commissioners as part of the audit in late 2003.

Anglo supplied a list of 3,000 accounts to Revenue, ultimately resulting in a tax bill to the bank of more than €3 million. But a non-resident deposit account belonging to John Peter O’Toole, the brother-in-law of Mr FitzPatrick, was not included on the list.

O’Mahoney and Daly “wilfully and knowingly” provided the incorrect information, the jury found.

The reasons for bringing charges of conspiracy include that it is sufficient for the prosecution to prove only that the conspirators planned for the offences to occur, not that the offences actually occurred.

Another reason is that the offence of destroying, mutilating or falsifying documents, under the Companies Act, can only be levelled against officers of a company. And while O’Mahoney and Daly were officers, Maguire was not. However, a person can conspire to commit an offence they themselves cannot commit.

The first set of conspiracy charges related to Mr O’Toole’s accounts. The three accused conspired to falsify company records by having the accounts deleted. In reality, when the IT department was asked to delete them, they archived them instead, but the offence was that the conspirators intended them to be deleted.

Separately, they were also found guilty of conspiracy to defraud Revenue by the deletion of Mr O’Toole’s accounts. It didn’t matter whether or not Revenue was actually defrauded.

The second set of conspiracy charges, brought against O’Mahoney and Maguire only, were that they conspired to falsify company records by having six other accounts deleted from the records.

Again, the accounts weren’t actually deleted, but four of them were archived and, it emerged during the trial, two were not even archived, but details were altered to remove any connection with Mr FitzPatrick.

A charge of conspiracy to defraud Revenue was also brought in connection with these accounts.

During the eight-week trial, the jury heard from former fraud prevention officer at the bank, Patrick Peake.

Mr Peake had been involved in the audit task team at the bank in 2003 and, in 2010, after the bank was nationalised and became the Irish Bank Resolution Corporation, he was chosen to investigate allegations that accounts had been deleted. His findings resulted in the bank notifying gardaí.

Another witness, Brian Gillespie, who was former head of compliance at Anglo, was also involved with the 2003 task team. He gave evidence of a series of meetings with Mr FitzPatrick in and around May 2003.

He said Mr FitzPatrick raised concerns about Mr O’Toole’s bank account being sent to Revenue and he suggested he might ask Mr Gillespie not to send the account.

Mr Gillespie also gave evidence that O’Mahoney had instructed him not to include the O’Toole account on the High Court order list until he gave him “the say-so”. And he did eventually give the say-so.

Separately, Mr Gillespie said Daly asked him if he would delete an account if asked to by Mr FitzPatrick, this time in the context of the Revenue audit.

IT witnesses Shay McGill and James Shaw outlined how they had been asked to delete accounts by Maguire, but were uncomfortable with it, so decided they would archive them instead.

This meant the accounts weren’t visible on the computer’s core banking system, but IT could still retrieve them if necessary. Patrick Gageby SC, for Maguire, referred to it as “an IT solution to an IT problem”.

Another witness, Zita Vance, former manager of treasury operations and assigned to head up the bank’s team to deal with the Revenue audit, said O’Mahoney asked her if she would remove a name from the audit list going to Revenue. When she said no, she was removed from the team.

There was also evidence that O’Mahoney received an email with a list of the six accounts, planned for deletion, from Monica Kearney, Mr FitzPatrick’s secretary.

Maguire also sent an email to Ms Vance in October 2003, explaining she would be working for O’Mahoney and Maguire worked in a separate office from the rest of the audit task team.

The prosecution painted a picture of three conspirators, working to hide accounts from Revenue. Though written evidence was lean, and oral evidence at times hard to pin down, the jury ultimately accepted the prosecution’s version of events.

The only potential gain was to a man not in the dock.