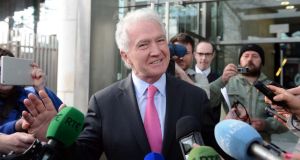 Bernard Condon SC, defending, told the court he was “concerned” about the trial date in October this year because of its proximity to the trial of the former officials, which concluded this week.

On Friday, Mr Condon submitted to Judge Martin Nolan in Dublin Circuit Criminal Court that “a cascade of sludge” was visited on the head of Mr FitzPatrick (66) during that trial.

Paul O’Higgins SC, prosecuting, submitted that the publicity did not render Mr FitzPatrick’s upcoming trial “incapable of going on”.

Judge Martin Nolan adjourned the matter until Thursday next week when he will decide on whether to postpone Mr FitzPatrick’s trial.