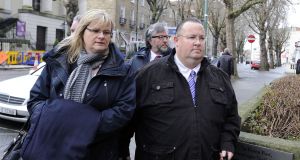 Philip Smith outside the Employment Appeals Tribunal last year: he was one of three executives suspended by RSA in Ireland in 2013.

Ireland’s biggest insurer, RSA, has reached an out-of-court settlement with its former chief executive Philip Smith relating to an appeal by the company of a €1.25 million award by the Employment Appeals Tribunal last year.

Mr Smith had been awarded this record sum last June after taking a case for constructive dismissal by RSA relating to his departure from the insurance company in controversial circumstances in late 2013.

RSA’s appeal of the award was listed for a hearing at the Circuit Court on Thursday but an agreement between the two sides has been reached following recent negotiations.

The details of the settlement are not known but RSA, a UK-based insurer that is listed on the London stock market, is expected to confirm on Tuesday that the case has been settled.

No comment was available from either RSA or Mr Smith on Monday night.

Mr Smith was one of three executives suspended by RSA in Ireland in 2013 after certain financial issues emerged at the insurer. The other two – former claims director Peter Burke and the chief financial officer Rory O’Connor – also took cases against RSA to the tribunal. Mr Burke’s case was settled in December without the need for a hearing at the tribunal while Mr O’Connor’s was settled in June.

Mr Smith tendered his resignation to RSA on November 27th, 2013, on the basis that his fate was already “pre-decided”. Issues had earlier emerged around large loss claims reserving, motor claims and other financial issues with the net result that RSA pumped more than €200 million into its Irish subsidiary.

The tribunal’s award represented two years’ earnings for Mr Smith, the maximum allowed by the tribunal.

Smith told the tribunal that, since leaving RSA, he had earned just €25,000 gross in consultancy fees and was relying on the support of family and friends.

He claimed RSA had obstructed his attempts to secure consultancy work, an allegation the insurer denied.

Tribunal chairwoman Niamh O’Carroll Kelly said his suspension on November 8th, 2013, on national television was like taking a “sledgehammer” to his reputation and to his “prospects of ever securing employment in this industry again in Ireland, in Europe and very possibly beyond”.

At the time, Derek Walsh, RSA’s group general counsel, said: “We believe the tribunal has reached conclusions which were not supported by the evidence and which demonstrate a serious misunderstanding of and a failure to grasp the key issues.

“It did not recognise the enormity of its finding that Mr Smith was aware of the reserving practices within RSA Ireland which involved ‘a potential breach of Central Bank regulations’.

“We are astonished by the amount of the award made by the tribunal which RSA believes is utterly inconsistent with that crucial finding and creates a dangerous precedent.

“We continue to believe that Mr Smith’s case is without merit and in the circumstances have no option but to appeal the judgment.”

The company recently briefed brokers here to the effect that it expects to return to profit in Ireland this year.