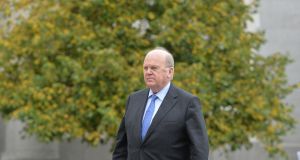 Michael Noonan: he said the special liquidators’ report in the first quarter of 2016 will include details of costs. Photograph: Alan Betson / The Irish Times

Minister for Finance Michael Noonan has declined to reveal the cost to the IBRC Special Liquidators of co-operating with the Commission of Investigation into certain transactions undertaken before IBRC was put into liquidation.

In a parliamentary questions before Christmas, Fianna Fáil spokesman for Finance Michael McGrath asked Mr Noonan what the costs were.

This followed revelations that the special liquidators had compiled and forwarded significant amounts of information to the commission, but had also said that it believed this information was confidential.

In reply, Mr Noonan said the special liquidators had advised him they intended to issue their third progress update report in the first quarter of 2016.

This will include the work undertaken in relation to the commission of investigation, including details of the cost incurred to date.