Number of homeloans behind with repayments declined by 1,333 in October 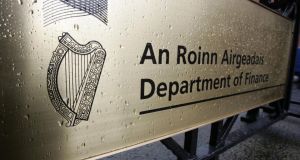 The level of owner-occupied and buy-to-let mortage arrears in Ireland continues to decline, according to latest data from the Department of Finance.

The total number of residential mortgages in arrears fell by 1,333 month-on-month in October and now stands at 94,782.

On the buy-to-let side, the number of accounts that were behind with their payments fell by 266 and now stands at 32,148.

The number of private-dwelling accounts with arrears of 90 days or more that have not been restructured had reduced by one-quarter at the end of October when compared with August 2013, when the department’s data series began.

According to the data, there was an increase of 2,988 permanent mortgage restructures at the end of October when compared with the previous month.

There was also a 10 per cent rise in the number of split mortgages at the end of October with 18,827 in place. This represented an increase of 1,744 on the figures at the end of September.

Split mortgages involve part of the loan being warehoused for repayment at a later date, while the borrower meets agreed payments on the other portion of the mortgage.

This makes split mortgages the second most used permanent restructuring treatment by lenders, after arrears capitalisation at 25,306.

In terms of temporary restructures, interest only was used in 7,032 cases followed by fixed repayments that are greater than interest only at 3,160.

The data is provided by six banks in Ireland - AIB, ACC, Bank of Ireland, KBC, Permanent TSB and Ulster Bank.