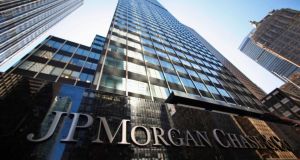 A sign outside the headquarters of JP Morgan Chase & Co in New York. Photograph: Mike Segar/Files/Reuters

Banking giant JP Morgan has tentatively agreed to pay $13 billion (€9.4 billion) to settle allegations surrounding the quality of mortgage-backed securities it sold in the run-up to the 2008 financial crisis.

If the agreement is finalised it would be the US government’s highest-profile enforcement action related to the financial meltdown that plunged the economy into the deepest recession since the Great Depression of the 1930s.

A person familiar with the negotiations between the bank and the federal government revealed the deal last night, speaking on condition of anonymity because it has not been finalised.

The person said the tentative agreement does not resolve a criminal investigation of the bank’s conduct. It is being handled by federal prosecutors in Sacramento, California.

On Friday night, Mr Holder told the bank that a non-prosecution agreement was a non-starter — meaning that the US justice department will continue to conduct the criminal investigation of the financial institution, said the person.

As part of the deal, the justice department expects JP Morgan to co-operate with the continuing criminal probe of the bank’s issuance of mortgage-backed securities between 2005 and 2007, the person said.

Of the $13 billion, $9 billion is fines or penalties and the rest will go to consumer relief for struggling homeowners, the person said.

When the housing bubble burst in 2007, bundles of mortgages sold as securities soured and the investors who bought them lost billions.

In the aftermath, public outrage boiled over that no high-level Wall Street executives had been sent to jail. Some politicians and other critics demanded that the big bailed-out banks and senior executives be held accountable.

In response, the US government in January 2012 set up a task force of federal and state law enforcement officials to pursue wrongdoing with regard to mortgage securities.

In September, JP Morgan agreed to pay $920 million and admit that it failed to oversee trading that led to a $6 billion loss last year in its London operation.

That combined amount, in settlements with three regulators in the US and one in Britain, is one of the largest fines ever levied against a financial institution.

In another case, the company agreed to pay a $100 million penalty and admitted that its traders acted “recklessly” with the London trades.

In August, the US justice department accused Bank of America, the second-largest US bank, of civil fraud in failing to disclose risks and misleading investors in its sale of $850 million in mortgage bonds in 2008. The Securities and Exchange Commission (SEC) filed a related lawsuit.

The government estimates that investors lost more than 100 million dollars on the deal. Bank of America disputes the allegations.

The latest action against the beleaguered JP Morgan brought the weight of the Obama administration against the bank, which has enjoyed a reputation for managing risk better than its Wall Street competitors.

JP Morgan came through the financial crisis in better shape than most of its rivals and Mr Dimon charmed politicians and commanded the attention of regulators in Washington.

A number of big banks, including JP Morgan, Goldman Sachs and Citigroup, have previously been accused of abuses in sales of securities linked to mortgages in the years leading up to the crisis.

Together they have paid hundreds of millions in penalties to settle civil charges brought by the SEC, which accused them of deceiving investors about the quality of the bonds they sold.

JP Morgan settled SEC charges in June 2011 by agreeing to pay $153.6 million and reached another such agreement for $296.9 million last November.

The banks in all the SEC cases were allowed to neither admit nor deny wrongdoing — which brought criticism of the agency from judges and investor advocates.

But in a first for a major company, JP Morgan admitted in the agreement with the SEC over the $6 billion trading loss in its London operation that it failed in its oversight. The admission could leave the bank vulnerable to millions of dollars in lawsuits.

JP Morgan also reached settlements over the trading loss with the Federal Reserve, the US Office of the Comptroller of the Currency and Britain’s Financial Conduct Authority.

The Justice Department is still pursuing a criminal investigation of the trading loss and a possible cover-up at the bank. Two of the bank’s former traders in London are facing criminal charges. The SEC also is investigating individuals involved in the trading loss.

Mounting legal costs from government proceedings pushed JP Morgan to a rare loss in the third quarter, the first under Mr Dimon’s leadership.

The bank reported on October 11th that it set aside $9.2 billion in the July-September quarter to cover litigation stemming from the financial crisis and its “London Whale” trading debacle.

JPMorgan said it has placed a total of $23 billion in reserve to cover potential legal costs.