There is a dispute between the parties over who should carry the can, but the stake was sold without McGivern being released from the guarantees 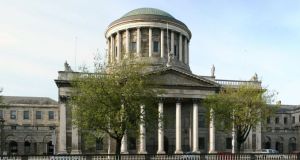 Four Courts: where the fallout from the Celtic Tiger glory days is still being played out

Eight years on, the fallout from the glory days still envelops the Four Courts, where developers, banks and solicitors are taking daily chunks out of each other over failed boomtime deals. It’s as vicious as cage fighting, but with wigs and cloaks and possibly Pimms afterwards.

I hear one such spat, a negligence case between the blue-blooded firm of solicitors run by Ivor Fitzpatrick, the brief-turned-property investor, and one of its former clients could soon be coming to the boil, with a court date possible for later this year. A juicy dust up it is, too, by the sounds of it.

The partners of Ivor Fitzpatrick, including the man himself, are being sued by Hugh McGivern, an insurance broker who was formerly a business partner of the developer, “Posh” Paddy Kelly. McGivern is being represented in the fight against his old firm by Noel Smyth, another of our learned friends who is better known for his property deals.

McGivern was a partner with Kelly in the Mango chain of fashion outlets, but agreed a sale of his shares to the developer in 2006. McGivern had guaranteed leases alongside his former partner, and claims he sought to be released from those guarantees in the negotiations, during which he was represented by Fitzpatrick’s firm.

There is a dispute between the parties over who should carry the can, but the stake was sold without McGivern being released from the guarantees.

Roll on 2009 and the economy came crashing down, and with it Kelly’s ability to pay his bills. Landlords started hounding McGivern on the back of his guarantees.

McGivern, who would not comment, blames Ivor Fitzpatrick solicitors for the mess. The firm, which did not comment either, is understood to firmly reject his allegations of negligence. It’ll soon be time to get it on. Queensbury rules?