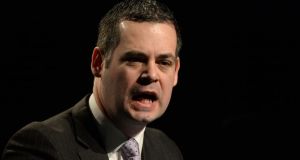 Pearse Doherty of Sinn Féin asked Kieran Wallace and Eamon Richardson whether they had a conflict of interest working for KPMG as both liquidator and former auditor. Photograph: Dara Mac Dónaill/The Irish Times


Former Irish Nationwide Building Society director Terry Cooney has written to the finance, public expenditure and reform committee to express “surprise” at the response of KPMG, the special liquidator of the society, to questions by its members. They concerned how the decision was taken not to sue its former auditors, also KPMG.

The special liquidators of Irish Nationwide, which was merged into IBRC, are KPMG accountants Kieran Wallace and Eamon Richardson. The collapse of Irish Nationwide cost the taxpayer €5.4 billion in part because of systemically poor lending practices.

Mr Wallace and Mr Richardson were questioned at the committee last month by Pearse Doherty of Sinn Féin on whether they had a conflict of interest working for KPMG as both liquidator and former auditor, and on what grounds the decision was taken not to sue the accountants as auditors.


McCann FitzGerald’s advice
KPMG told Mr Doherty the previous board of the society had taken this decision based on the advice of law firm McCann FitzGerald. It said it planned to “shortly be announcing a different arena for managing the litigation [relating to INBS] . . . [And] that independent group can make a decision on whether it feels it necessary to include KPMG.”

Mr Cooney’s letter, written by his solicitors Noel Smyth & Partners, stated it wished to draw the “attention” of the committee and Mr Doherty to the previous board of Irish Nationwide’s extensive relationship with McCann FitzGerald from 2001 onwards. The letter suggests to the committee KPMG as special liquidator did not adequately explain to its members how McCann FitzGerald had previously advised the society under its then chief executive Michael Fingleton on many matters, just as KPMG did.

“Our client was somewhat surprised with the response of the liquidator, Mr Wallace, to the question raised by Mr Doherty,” Mr Cooney’s letter dated March 14th said. “We are instructed that McCann FitzGerald have been advising the board of INBS since 2001 and have not just been advising the new board since 2009 . . .


Previous roles
“We are further instructed by our client that McCann FitzGerald, solicitors, were heavily involved in various aspects of the INBS’s due diligence and the demutualisation process from 2001 right up to 2009, and of course are now the same solicitors advising the liquidators, Mr Wallace and Mr Richardson.” KPMG also acted for the society in preparing it for demutualisation and sale.

A spokesperson for McCann FitzGerald declined to comment on how it dealt with potential conflict-of-interest issues in relation to Irish Nationwide.

“The firm do not comment on client matters, and there is nothing further to add on this,” it said. A spokesman for KPMG, also declined to comment.