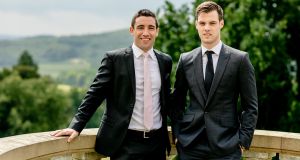 Patrick Lynch and Tony Ennis of First Circle: “We were surprised by the lack of support offered to local businesses, particularly when it comes to access to capital”

The company was formed to address what it says is the undersupply of short-term working capital and trade finance to SMEs in the Philippines and southeast Asia.

First Circle said it would provide SMEs with cost-effective collateral-free loans through its online platform. It claims companies can apply in a few minutes and receive an answer within 24 hours.

First Circle said it intended to use the seed funding to further develop the company’s online platform and technologies and to grow its staff numbers to address a funding gap estimated at $50 billion by the Asian Development Bank.

The $1.2 million seed funding round was led by Dublin- and London-based Key Capital and supported by San Francisco-based 500 Startups and Singapore-based IMJ Investment Partners.

The company began offering its services in the Philippines in April, as part of a beta roll-out, but officially launched earlier this month. It has also been working on building partnerships with local trade bodies and ecommerce platforms.

“Much like in Ireland small businesses are the lifeblood of the Filipino and southeast Asian economies,” said chief executive Patrick Lynch.

“Yet despite their potential in a rapidly expanding economy, we were surprised by the lack of support offered to local businesses, particularly when it comes to access to capital. We’re looking to change that and early indications suggest we’re on to something.”

1 Fair Deal nursing homecare leaves little for bills and gifts
2 Getting out from under ‘never-ending’ Celtic Tiger debt burden
3 Pensions row fix could threaten future of State payment, actuaries warn
4 Tax and spend: What have FG done for your pocket?
5 Portugal set to curb tax breaks for wealthy foreigners
6 Pilita Clark: When a rude boss keeps you waiting, why not walk out?
7 Apple reports sales and profit growth over Christmas
8 Money matters: ‘My father embarrassed us with his haggling’
9 Pound dips as Bank of England decision looms
10 US budget deficit forecast to blow out by mid-century
Real news has value SUBSCRIBE