Rise in activity primarily due to sales associated with IBRC 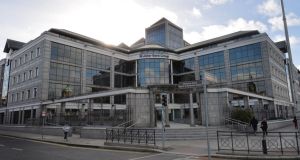 Ulster Bank headquarters. It and Bank of Scotland have been involved in significant loan sales.

Irish banks sold portfolios with a face value of €28.5 billion in the first nine months of this year, more than 14 times the level achieved in the same period of 2013.

The rise in activity was due primarily to asset sales of €19 billion associated with Irish Bank Resolution Corporation, according to research compiled by global accounting group PwC.

Ireland has been by far the busiest market in Europe this year. Banks here accounted for about 42 per cent of loan sales in the region between January and September and the pace of activity is set to continue for the rest of the year.

CRE accounted for €25 billion of the sales here in the first nine months, with “secured retail” at €1.5 billion and SME/corporate at €2 billion.

According to PwC, portfolio sales by Irish banks amounted to €2 billion last year and €3 billion in 2012.

At €16 billion, Spain was second to Ireland in terms of the value of sales executed this year, with the UK at €9 billion, Italy at €6 billion and Germany at €5.5 billion.

PwC estimates that an additional €50 billion worth of sales are in progress, which would bring the total for 2014 to €117 million.

Commenting on the Irish data, David Tynan, a corporate finance partner with PwC Ireland said: “The pace of loan portfolio sales accelerated rapidly in Ireland during 2014. While this is largely driven by the successful sale of the IBRC book, there have been significant loan sales by a number of banks including both Bank of Scotland and Ulster Bank.

“The major buyers of these loans are now well established in the Irish market and are actively looking for more product now that they have a presence here. This should result more deal flow in 2015, albeit at a lower level as the Irish banks complete the sale of their non-core loans.”