Inside the ‘cartell’: chat-room traders boasted of whacking FX market 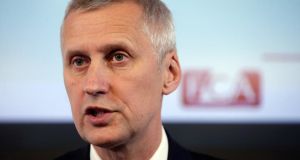 Martin Wheatley, chief executive officer of the UK Financial Conduct Authority (FCA), speaks during a news conference following an announcement by the FCA, the Commodity Futures Trading Commission and the Swiss Financial Market Supervisory Authority yesterday, about penalties given to five banks following a global foreign-exchange rigging probe. The FCA said its fines relate to “ineffective” controls at UBS, Citigroup, JPMorgan Chase, Royal Bank of Scotland Group, and HSBC, that allowed the banks to put their “interests ahead of those of their clients, other market participants and the wider UK financial system.” (Photograph: Matthew Lloyd/Bloomberg)

In an early morning chat, three senior currency traders at some of the world’s biggest banks weighed the pros and cons of admitting a fourth member to their private instant-message group.

The traders - from Citigroup, JPMorgan Chase and UBS - had worked together for years to manipulate the $5 trillion-a-day currency market by sharing details of client orders and coordinating trading strategies. While adding a new recruit would bolster their strength, they worried he couldn’t be trusted to put the group’s interests ahead of his firm’s.

“Will he tell the rest of desk stuff,” Richard Usher, JPMorgan’s chief London-based dealer, wrote in the chat published yesterday by the US Commodity Futures Trading Commission. “Or god forbid his nyk,” he said, referring to the New York trading desk. “That’s the really imp[ortant] q[uestion],” replied Citigroup’s London-based head of European spot trading, Rohan Ramchandani. “Don’t want other numpty’s to know. Is he gonna protect us like we protect each other.”

The undated conversation and hundreds of others form the bedrock of investigations that yesterday saw regulators penalise six banks, including Citigroup, JPMorgan and UBS, a record $4.3 billion for rigging foreign-exchange benchmarks. The transcripts show traders boasting about “whacking” and “double teaming” the market and congratulating one another when plans paid off. The fines are the first wave of sanctions against banks and could be followed by criminal charges.

The allegations and fines indicate “real bad behavior going on in the industry, and that’s the kind of thing we’ve got to root out,” Morgan Stanley chief executive officer James Gorman, whose firm wasn’t among those faulted, said today in a Bloomberg Television interview in Singapore. Eliminating “any form of collusive behavior is critical to trust and confidence in the industry.”

The three traders at Citigroup, JPMorgan and UBS eventually agreed to let the newcomer join because he would “add huge value to this cartell,” one wrote. He was admitted for a month- long trial and told “mess this up and sleep with one eye open at night.”

While Usher and Ramchandani weren’t named in the document released by the CFTC, their identities were confirmed by two people with knowledge of the probes who asked not to be named because some details of the settlement remain private. The other traders couldn’t be identified. Ramchandani, who was fired by Citigroup earlier this year, and Usher, who left JPMorgan after being put on leave in 2013, declined to comment. They haven’t been accused of wrongdoing by authorities.

The traders, and others at banks including HSBC Holdings and Royal Bank of Scotland, would congregate in chat rooms an hour or so before benchmark rates are set to discuss their aggregate trading positions and how to execute them to their mutual benefit, according to statements and transcripts released yesterday by US, UK and Swiss regulators. The groups dubbed themselves “the 3 musketeers,” “1 team, 1 dream” and “the A-team,” Britain’s Financial Conduct Authority said.

The fines arose from traders’ attempts to manipulate the WM/Reuters currency benchmark, which is used to determine the value of $3.6 trillion in index tracker funds around the world. The rate, known as the fix, is set for more than 130 currencies by taking a snapshot of trades in the 30 seconds before and after 4 pm in London.

From at least January 2008 through early 2012 traders adopted an array of strategies to maximize their profits at the fix, regulators said. If one of them had orders that ran counter to the rest of the group, he would attempt to offload his position with an unsuspecting counterpart at another bank to avoid clashing with co-conspirators. If the traders all had orders in the same direction, they would seek to turbocharge any price moves. In the minutes before the fix, they would attempt to sniff out any banks with large orders in the other direction and trade with them in advance, a process known in the market as “taking out the filth.” At other times they would trade with third parties outside the chat room with the intention of giving them orders in the same direction to execute at the fix.

Sometimes they would transfer their orders, known as “ammo,” in a particular currency pair to one trader, or divvy up the orders between two traders who worked together to maximize their impact on the fix, regulators said. After establishing that they both had a lot of euros to sell in exchange for dollars at the fix one day, Usher and Ramchandani agreed to join forces, according to a transcript published by the CFTC without a date. Usher, a former RBS trader, was the moderator of the chat room known as “The Cartel,” people with knowledge of the matter said in December.

Ramchandani joined Citigroup’s trading desk after graduating from the University of Pennsylvania with a degree in economics. “Tell you what, lets double team it. How much you got,” Usher asked about eight minutes before that day’s fix. “ok. 300. U?” his counterpart at Citigroup replied. “ok ill give you 500 more,” said Usher. Even colluding with one another was no guarantee traders would succeed in moving the rate. The market moved against Ramchandani and Usher that day, and they lost money, according to the transcript. On other occasions they boasted of making hundreds of thousands of dollars on a trade.

“The traders put their own interest ahead of their customers, they manipulated the market -- or attempted to manipulate the market -- and abused the trust of the public,” FCA CEO Martin Wheatley told reporters at a briefing in London yesterday, without identifying which traders he was talking about.

The regulator will press firms to review their bonus plans and claw back payments already made. The fines were the largest the British regulator has imposed and mark the first time it has entered into a group bank settlement. Some foreign-exchange traders became concerned that their own communications could be problematic as their banks prepared to settle with regulators over allegations of rigging another benchmark, the London interbank offered rate, in 2012.

In March of that year, an unidentified JPMorgan trader asked the bank’s compliance team what procedures they had in place about sharing information in chat rooms with traders at other firms ahead of the fix, the FCA’s settlement with the bank shows.

That same month Niall O’Riordan, UBS’s co-chief currency dealer, called Bank of England official Martin Mallett to discuss how banks communicated ahead of the fix to seek his advice about whether the chats would raise concerns by regulators, according to a report released yesterday by the central bank. Mallett described the practices as “the murkier side of our business” and raised the issue at a meeting of senior foreign-exchange dealers in April 2012. Mallett was dismissed November 11th for “failure to adhere to the bank’s internal policies,” not as a result of the investigation, the BOE said.

Citigroup, the world’s top currency dealer, was ordered to pay the biggest fine at about $1.02 billion, according to statements from the CFTC, FCA, the Swiss Financial Market Supervisory Authority and the Office of Comptroller of the Currency. JPMorgan will pay $1.01 billion, followed by UBS with $800 million.

RBS was fined about $634 million, HSBC $618 million and Bank of America Corp. $250 million. Barclays Plc, which had been in settlement talks, said it wasn’t ready for a deal. More than 30 dealers have been fired, suspended, put on leave or resigned since the probes began last year. Banks are overhauling how they trade currencies to regain the trust of customers. They have capped what employees can charge for exchanging currencies, limited dealers’ access to information about customer orders and banned the use of online chat rooms, people familiar with the moves said in September. Despite the impact their behavior had on the value of trillions of dollars of investments around the world, the traders regularly congratulated each other for successfully manipulating the market. “Well done gents,” said one trader after one day’s fix, according to the CFTC settlement document. “Hooray nice team work,” a trader at another bank replied.