Why would firm consider acquiring national radio station that is losing market share? 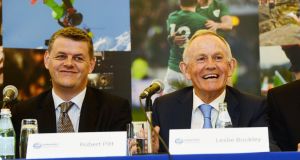 If Denis O’Brien was unhappy about recent events at Independent News and Media, the 2.6 per cent drop in its share price in Dublin yesterday won’t have lifted his mood.

It had the effect of wiping €4.2 million off its market capitalisation, and reducing the paper value of O’Brien’s 29.45 per cent stake by just more than €1.2 million.

This followed the revelations by The Irish Times that INM’s chief executive Robert Pitt and its chairman, Leslie Buckley, had a serious dispute recently about the possible acquisition of Newstalk, the national radio station owned by O’Brien’s Communicorp. The dispute was serious enough for Pitt to consider his position.

Communicorp had a valuation carried out by IBI Corporate Finance while Pitt commissioned one from company broker Davy. The Davy valuation was lower with Pitt unwilling to meet Communicorp’s figure. This led to boardroom tensions, with Pitt making a complaint to INM’s senior independent director Jerome Kennedy. A sub-committee was established to look into the matter and its report found that “no issue of concern arose for the company”.

INM said Pitt and Buckley both absented themselves from the board meeting that considered the sub-committee’s report. It’s not clear if Paul Connolly, who is a director of both INM and Communicorp and is a long-time business associate of O’Brien, also excused himself from this meeting. The company wouldn’t comment on the matter yesterday while attempts to reach Connolly were unsuccessful.

This is an extraordinary boardroom spat even for INM, whose shareholders removed Buckley as a director in mid-2011 and dumped chairman James Osborne at its agm in June 2012, along with its then finance chief Donal Buggy. Those events were framed by the battle for INM between O’Brien and Sir Anthony O’Reilly.

Given Buckley’s close business relationship with O’Brien, he surely should have excused himself from any consideration of a deal to acquire Newstalk, rather than potentially involving himself in a transaction with another company owned by O’Brien. It would be surprising if the chairman of CRH, for example, got involved in efforts to purchase a cement factory from their business partner.

It would also be interesting to know if this potential conflict of interest had any impact on the decision of Communicorp chairman Lucy Gaffney, who is also a long-time business associate of O’Brien, to step down as a non-executive director of INM earlier this year.

Arguably, INM should be focusing on the knitting, namely the tortuous switch from print to digital.

How would this deal have been in the best interests of all shareholders? What is the position on this matter of Dermot Desmond, INM’s second largest shareholder with a 14.9 per cent stake and a close friend of O’Brien? Why did O’Brien want to offload Newstalk to INM?

There are also questions to be asked of the Broadcasting Authority of Ireland given that O’Brien is believed to have met it to discuss the possibility of selling Newstalk to INM. Denis Naughten, the Minister for Communications, must be relieved that nothing came of the deal as it spared him from having to adjudicate on the merger at a time when O’Brien is suing the State over comments made about him in the Oireachtas.

Meanwhile, members of INM’s defined benefit pension fund are left to fret about the company’s decision to close their scheme. The trustees believe this will yield a €24.7 million balance sheet benefit to INM.

The company will hold an egm on Monday to seek approval for a capital reduction. The motions will pass but Buckley could be in for an uncomfortable afternoon and there is every likelihood that the trustees or pension scheme members could seek to block this move whenever INM asks the High Court to approve the share capital changes.

Unless INM offers a compromise to pensioners, it might be a case of winning the battle but losing the war on its capital reduction, which is expected to pave the way for a dividend payment to O’Brien and other shareholders.

The same outcome – winning the battle but losing the war – might also await Pitt following his defiance on the Newstalk issue. Twitter: @CiaranHancock1