IBRC to review decision not to sue KPMG 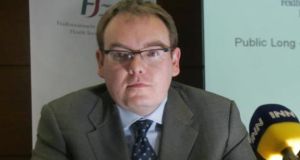 Liquidators Kieran Wallace (pictured) and Eamon Richardson, were appearing before the Joint Committee on Finance, Public Expenditure & Reform when they were questioned on the matter

The special liquidators to IBRC will put a new structure in place for managing litigation against former auditors in order to deal with any apparent conflicts of interest that may exist, an Oireachtas committee was told yesterday.

Liquidators Kieran Wallace and Eamon Richardson, who are both partners with KPMG, were appearing before the Joint Committee on Finance, Public Expenditure & Reform when they were questioned on the matter.

Mr Wallace said the new structure would be announced in the coming weeks and could then independently decide if KPMG should be sued.

He said he and his colleague took independent legal advice as to whether KPMG should be sued and were advised it should not. Since then, however, a member of the former board of Irish Nationwide had joined KPMG to a case being taken by the special liquidators against the former board.


Independent advice
Mr Wallace was responding to Michael McGrath of Fianna Fáil, who asked about apparent conflicts of interest. Responding to Pearse Doherty of Sinn Féin, Mr Wallace said the independent legal advice had been received from McCann FitzGerald solicitors.

Mr Doherty said the firm had for many years supplied corporate governance advice to Irish Nationwide, to which Mr Wallace replied that this was to the board that replaced the “old board”.

He said that the new board of Irish Nationwide had taken legal advice as to who should be sued. It was this board that decided to bring the litigation and this decision was made prior to he and Mr Richardson being appointed special liquidators.

Separately, Minister for Finance Michael Noonan said he will not ask the special liquidators to consider taking legal action against KPMG as former auditor of Irish Nationwide.


Parliamentary question
In answer to a parliamentary question from Mr Doherty, Mr Noonan said the primary duty of the special liquidators was to the creditors of IBRC and not to KPMG. “I fully expect that the actions they take are taken in the best interests of the liquidation and I do not propose to intervene in matters such as these. As this is a matter that is currently before the courts, I am not in a position to comment any further on it,” he said.

It emerged yesterday in The Irish Times that KPMG had advised the financial regulator that controls in Irish Nationwide, the institution it audited, were “much improved” in a meeting on June 12th, 2008. The accountants also said they were “satisfied” with its then board, the same board that is now being sued by Mr Richardson and Mr Wallace.