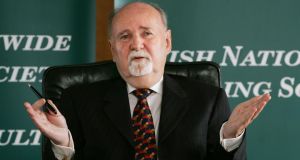 The legal action against former Irish Nationwide chief executive Michael Fingleton is due back in court in two weeks’ time and the case could go to a full trial by the end of the year.

The news follows reports that four other former directors of the insolvent building society paid close to €20 million to settle cases taken against them by the special liquidators of the Irish Bank Resolution Corporation (IBRC), which took over Irish Nationwide in the wake of the financial crash.

Special liquidators Kieran Wallace and Eamonn Richardson of KPMG are continuing with their action against Mr Fingleton arising from the circumstances that caused Irish Nationwide’s collapse and have not entered talks on a settlement with the one-time chief executive.

It is understood that the case will be ready to go to a full trial either late this year or early next year.

The lawsuit taken by the liquidators on behalf of the State-owned bank alleges that he failed to properly discharge his duties to the building society. Mr Fingleton has denied any wrongdoing.

According to reports over the weekend, four former directors, Michael Walsh, Terence J Cooney, David Brophy and John S Purcell, agreed to pay between €15 million and €20 million to settle the action that they were facing.

Much of it was met by the former building society’s insurers.

A source said that they were “very happy” with the figure. The deal arose from mediation talks with the four men in question.

In a statement last week, Mr Wallace and Mr Richardson said they believed the settlement was a positive result for the bank and best served its interest and those of its creditors.

Mr Fingleton ran the Irish Nationwide Building Society from 1971 to 2009. In 2013 the Commercial Court was told that it had an unusual management structure, where the board delegated all of its powers by resolution to Mr Fingleton, giving him significant autonomy on lending and decision-making. Much of the case focuses on lending practices that may have breached the society’s own guidelines. The liquidators have recruited a number of legal and financial experts to support their case.

The liquidators are in the process of winding down the IBRC, with two massive corporate legal actions involving the family of the former billionaire Seán Quinn, among the matters outstanding. The decision to liquidate IBRC two years ago allowed the Government to replace promissory notes with Government bonds in an exercise that reduced the State’s deficit by about €1 billion a year.

The outcome of a review by solicitors Eugene F Collins of the performance of Irish Nationwide’s auditors, KPMG, is expected in three months.