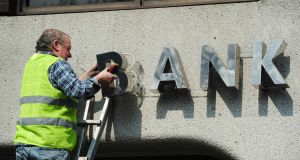 The former director of finance at Irish Life and Permanent was concerned that his bank would lose money if Anglo Irish Bank “went bust” after the banks engaged in €7.2 billion in inter-bank loans, a trial has heard.

ILP’s former director of finance, Peter Fitzpatrick (63) of Convent Lane, Portmarnock, Dublin, John Bowe (52) from Glasnevin, Dublin, who had been Anglo’s head of capital markets, Mr McAteer of Greenrath, Tipperary Town, Co Tipperary and Mr Casey from Raheny, Dublin have all pleaded not guilty at Dublin Circuit Criminal Court to conspiring together and with others to mislead investors through financial transactions between March 1st and September 30th, 2008.

The interbank loans allegedly involved money being transferred by Anglo to Irish Life and Permanent (ILP) and then being put back on deposit with Anglo via ILP’s life assurance division.

The transfer would allegedly appear as corporate deposits and not an interbank loan so the bank’s corporate funding figure would appear bigger for the bank’s year-end figures on 30 September, 2008.

On day 32 of the trial the jury heard excerpts of a telephone call in which Mr Fitzpatrick discussed the loans with Paul Kane, a liquidity manager with ILP.

During one call, recorded on September 25th, 2008, Mr Fitzpatrick asked Mr Kane: “Are we going to be absolutely satisfied that if something goes pop we don’t have to sort of give Anglo their...loans and anything else back without getting our money?”

Mr Kane told Brendan Grehan SC, defending Mr Fitzpatrick, that at this point Mr Fitzpatrick introduced the option of “set off” or netting the loans against each other. The jury has already heard that netting involves consolidating or offsetting the value of two or more transactions, effectively allowing debts to cancel one another out.

Mr Fitzpatrick told Mr Kane: “I’m thinking of offset now. So Anglo goes bust next week and the liquidator walks in and he says ‘give me deposits back’ and we say ‘ah but like we had an agreement’, ‘prove it’”.

“Unless there are letters...or an agreement that we can set off between the two... and the liquidator comes in [AND]says give me the money back, we have to give him the money back.”

He tells Mr Kane “this has to be documented” adding “so there is absolutely no fucking confusion in anyone’s mind that we can stand over it as a binding agreement”.

The court heard that before the two banks did agree in the end to netting the transactions against each other. The trial continues on Monday before Judge Martin Nolan and a jury.

1 How can I view my dead brother’s will if I’m not the executor?
2 Provisional liquidator appointed to Dublin engineering firm
3 Bursting of Tesla bubble a case of ‘not if, but when’
4 Finance Ireland’s IPO, Huawei and Irish 5G, and pay rises at Bank of Ireland
5 US reiterates opposition to Huawei equipment being used for Irish 5G
6 Finance Ireland plans stock market flotation in May
7 Must you pay a price for ethical investment?
8 Bank of Ireland staff in line for 2.95% pay increase
9 Should AIB compensate me for upsetting letter on arrears?
10 Ulster Bank’s ability to write off future profits against legacy losses reduces
Real news has value SUBSCRIBE