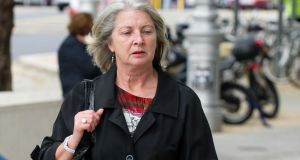 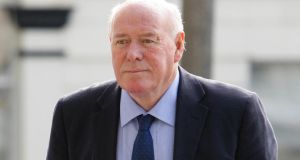 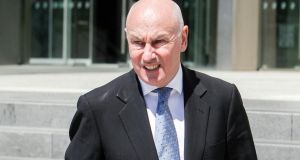 An account held in Anglo Irish Bank was not furnished to the Revenue Commissioners because it was connected with the bank’s former chairman Seán FitzPatrick, the jury in the trial of three former Anglo officials has been told.

In his opening statement, Dominic McGinn SC, for the prosecution, said an account held by John Peter O’Toole was omitted from a list of non-resident accounts to be given to Revenue in March 2003.

Mr McGinn said that it was deliberately omitted because it was connected with Mr FitzPatrick, who was Mr O’Toole’s brother-in-law.

He told the jury of six men and six women that in 2004, there were also attempts to delete information from the bank’s database about six other accounts, the motivation for which was a connection between the accounts and Mr FitzPatrick.

They have pleaded not guilty.

All three are accused of conspiring to destroy, mutilate or falsify documents relating to accounts of Mr O’Toole held at Anglo Irish Bank.

Mr Daly and Mr O’Mahoney are accused of furnishing a list of bank accounts in connection with tax that did not include Mr O’Toole’s.

Ms Maguire and Mr O’Mahoney are accused of conspiring to destroy the records of six accounts and defraud revenue.

Mr McGinn told the jury there would be significant parts of the trial that wouldn’t be exciting.

He said that the courts were usually full of offences such as those seen on television in Crimecall or in Love/Hate, but this trial would be long and would involve tax and fraud.

“There are no punch ups or car chases,” he said.

He told the jury that in the early 1990s and late 2000s, Revenue began looking at non-resident bank accounts.

He said that Deposit Interest Retention Tax (DIRT) did not apply to the accounts of people who did not live in the State, but that some non-resident accounts were bogus and tax should have been paid on them.

Revenue was said to have contacted all banks to ask them about non-resident accounts and Anglo told them they had no such accounts.

However, when a tax amnesty followed, some people came forward who had such accounts in Anglo. Revenue then decided to investigate the bank.

Revenue got a High Court order in March 2003 requiring Anglo to provide a list of non-resident accounts.

To comply with that, a team was sent up in the bank led by Mr Daly. Mr O’Mahoney had a supervisory role in the team, and the prosecution alleged that Ms Maguire was appointed to the team by Mr O’Mahoney to report directly to him and influence team members.

In November 2003, lists were provided and Mr O’Toole’s name was left out of the list for March 1995.

He said Mr Daly and Mr O’Mahoney both had separate conversations with separate team members who refused to omit Mr O’Toole’s name from the list, and that those members were removed from the team.

In 2004, there were attempts to delete the information from the bank’s database, counsel said.

Mr McGinn said that staff in Anglo’s IT department were instructed to delete references to Mr O’Toole’s accounts and to six other accounts.

Mr McGinn alleged that the IT department was uncomfortable regarding the deletions and so instead archived the information.

He said that the attempt to delete those accounts was motivated by a connection between the accounts and Mr FitzPatrick.

“To a greater or lesser extent, Seán FitzPatrick has involvement in this case.”

Counsel told the jury the six accounts were set up to trade offshore or manage property and were held in the Isle of Man or Jersey, but they were Anglo accounts, and that there was a concerted effort made to conceal them for the purpose of not paying tax.

Mr McGinn said that all three accused were involved in the attempt to delete Mr O’Toole’s accounts from the bank system and Mr O’Toole’s name was removed from the tax list by Mr Daly and Mr O’Mahoney.

Mr O’Mahoney and Ms Maguire were involved in an agreement to delete the other six accounts and hide references to them in the bank system, Mr McGinn said.

He told the jury there would be no direct evidence, or “smoking gun”, in the case. He also said the prosecution did not have to prove that Revenue was actually defrauded.

The trial continues on Tuesday